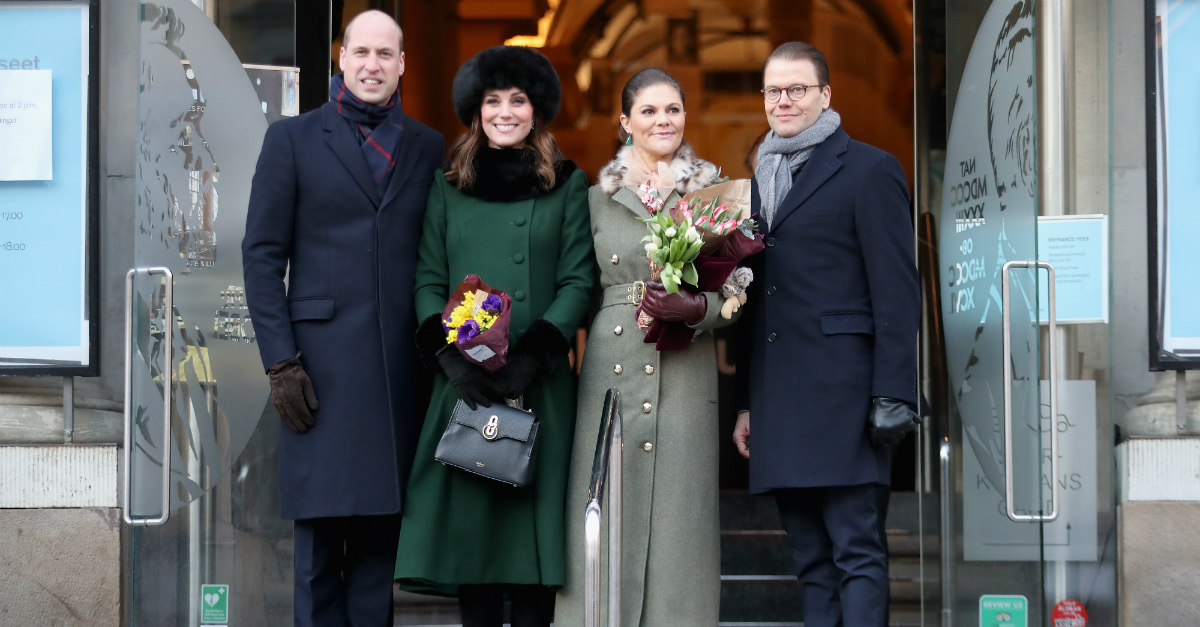 It was a royal family affair in this adorable photo from Prince William and Duchess Catherine’s four-day trip to Sweden and Norway.

After playing bandy hockey earlier this morning, Catherine and William joined King Carl KVI Gustaf, Queen Silvia, Crown Princess Victoria and Prince Daniel for lunch at the Royal Palace of Stockholm and the three couples posed together for one epic royal photo.

Kate and Victoria were twinning in similar faux furs and green coats as they out into the snowy Stockholm day. The coats weren’t the only thing these royal ladies have in common, sort of. Princess Victoria will one day be Queen of Sweden while Duchess Catherine will become a consort when her husband becomes King. PEOPLE reports that William and Victoria are actually distant cousins! The Swedish royal couple also attended William and Kate’s royal wedding in 2011 and each couple have one daughter and one son, respectively.

RELATED: Duchess Catherine made good use of her hair after chopping off 7 inches of her gorgeous locks

The Duke and Duchess, accompanied by Crown Princess Victoria and Prince Daniel, leave the Royal Palace of Stockholm for Stortorget Square #RoyalVisitSweden pic.twitter.com/yywsAW70X3

The couples also met with some of the country’s global furniture and architectural brands, including IKEA, on the tour.

TRH meet some of Sweden's most iconic and global furniture brands – including IKEA – and some of the country's up-and-coming homeware designers #RoyalVisitSweden pic.twitter.com/CD9KuueWr3

After the tour, the Duke and Duchess attended a black tie dinner at the Residence of the British Ambassador where they met with Prime Minister Stefan Löfven and his wife Ulla Löfven. Swedish actors Stellan Skarsgård and Alicia Vikander were among the distinguished guests at the event.

The Duke and Duchess meet Swedish Prime Minister Stefan Löfven and his wife Ulla Löfven at the Residence of the British Ambassador #RoyalVisitSweden pic.twitter.com/hEKzxT6TTM

Their Royal Highnesses meet guests including Swedish actors Stellan Skarsgård and Alicia Vikander at the Residence of the British Ambassador #RoyalVisitSweden pic.twitter.com/SSZ37Iti0B

William and Kate kicked off their official tour on Monday evening after taking their children Prince George and Princess Charlotte to school in the morning. From Sweden, the couple will move to on to Norway to wrap up the tour. William will fly solo at one event in Norway so that the pregnant Duchess can rest.