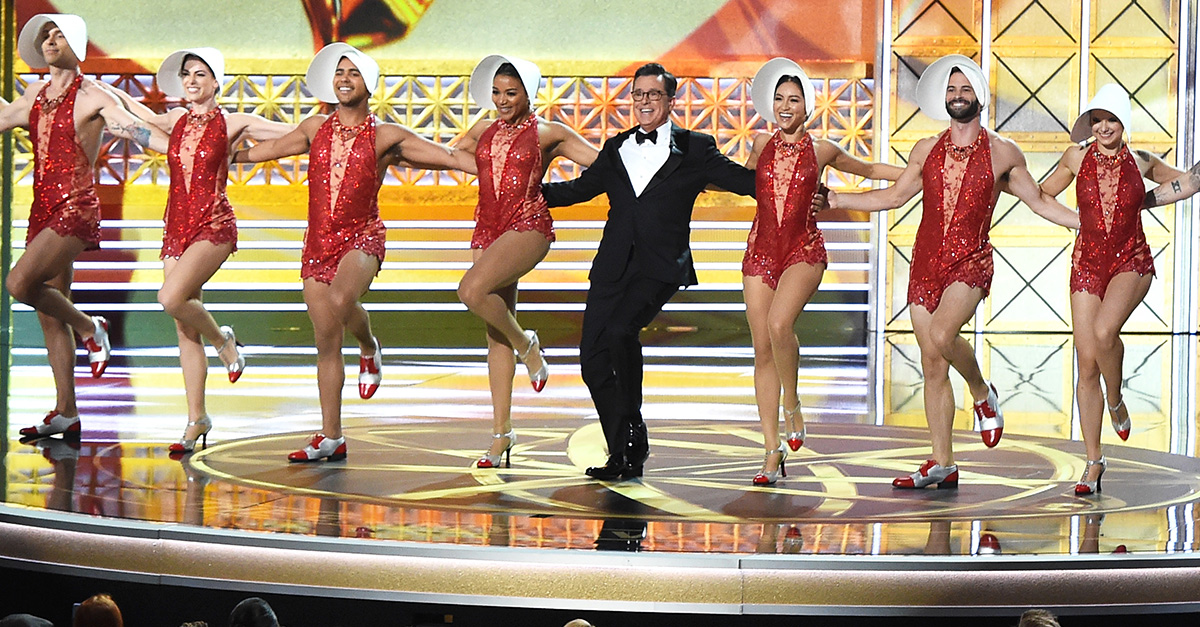 This year’s Emmy Awards was definitely for the girls, such as leading ladies Nicole Kidman, Kate McKinnon and Julia Louis-Dreyfus and the women-led casts from “Big Little Lies,” “The Handmaid’s Tale” and “Black Mirror: San Junipero,” but there were several other moments from the night that really left fans at home in complete awe.

Here’s a roundup of the top five moments from the night that will be all of the chatter around the water cooler this morning.

Former White House Press Secretary Sean Spicer was one of the first highlights of the evening when he rolled out his podium and made a cameo appearance alongside Stephen Colbert. Colbert dragged President Donald Trump throughout most of his opening monologue, but this moment literally made jaws drop.

Did you catch @seanspicer's cameo at the #Emmys? Relive the bizarre moment (WATCH) https://t.co/LWXKfTS2VK pic.twitter.com/4W5SvT2wa3

Actor and director Donald Glover took home not one, but two Emmys on Sunday night: one for best actor in a comedy series and another for best director in a comedic Series. The latter award was groundbreaking as he was the first black director to ever win in the category.

During his acceptance speech for best comedic actor, Glover said that the award should go to President Donald Trump, because he has been making black people “number one on the most oppressed list.”

“He’s the reason I am probably up here,” Glover said.

Nicole Kidman speaks out against domestic violence during her acceptance speech

Actress Nicole Kidman took home the award for best lead actress in a limited series or TV movie for her portrayal of a domestic abuse victim in HBO’s “Big Little Lies” on Sunday night.

In her emotional acceptance speech, Kidman took a moment to talk about domestic violence and the victims who sometimes suffer alone.

“We?ve shown a light on domestic abuse,? she said. ?It is a complicated, insidious disease. It exists far more than we allow ourselves to know. It is filled with shame and secrecy, and by you acknowledging me with this award, it shines a light on it even more.?

Nicole Kidman thanks the #Emmys for "shining a light on domestic abuse" https://t.co/fQHkjymk9C pic.twitter.com/Wn6ZusqRfW

Her “Big Little Lies” TV husband, Alexander Skarsgard, also took home the Emmy for his role in the series.

RELATED: This actor and director made history as he accepted his Emmys at this year?s show

“This Is Us” star Sterling K. Brown refused to let the music cut off his acceptance speech

Sterling K. Brown made history on Sunday night after becoming the first black actor in 19 years to win the Emmy for outstanding lead actor in a drama series, and he wasn’t going to let anyone get in the way of his time in the spotlight.

To keep things short, the show plays music to get the winners to wrap it up, but Brown wasn’t having it. He thanked his fellow nominees, fans, cast mates and the list went on and on.

“Milo, Mandy, Justin, Chrissy, you are the best white TV family that a brother has ever had ? better than Mr. Drummond, better than them white folks at ?Webster,?? he said. ?Susan Kelechi Watson, it is my pleasure to rep black love with you, sister. Let?s keep doing it like Martin and Gina.?

He continued to thank the writers as the music got louder and louder and the show eventually went to commercial.

Don’t worry, he was able to wrap it up backstage after getting cut off.

Elisabeth Moss drops the F-Bomb twice in her acceptance speech

Actress Elisabeth Moss was just a little excited when she accepted her first ever Emmy Award for her role in “The Handmaid’s Tale” on Sunday night.

When she got up onstage, the actress dropped the f-bomb as she took the Emmy in her hands and once again when she thanked her mother, who was in the audience, for all of the love and support through the years.

“You are brave and strong and smart, and you have taught me that you can be kind and fucking badass,” she said. Out of breath, she also took a moment to thank the author who wrote the book and gave shout-outs to Hulu and MGM.