Tom Hanks Transforms Into Mr. Rogers and The Resemblance Is Uncanny 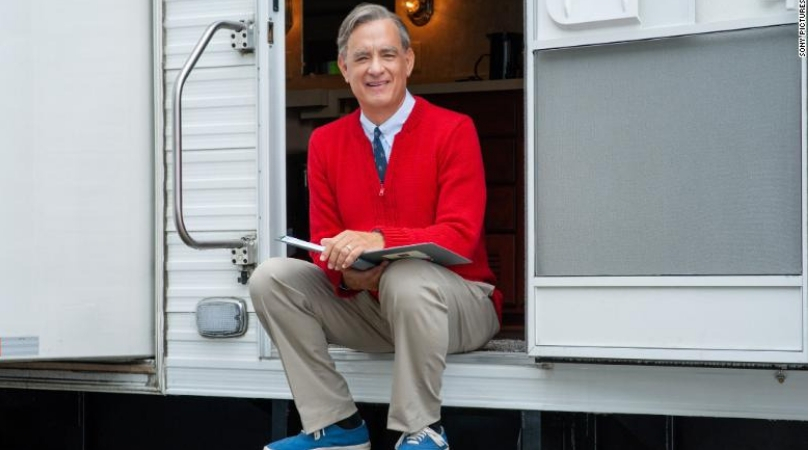 Are you ready for Tom Hanks to be your friendly neighbor? We most certainly are, especially after seeing this incredible and emotional clip! Sony Pictures has released finally released the highly anticipated trailer showing the actor as the iconic children’s show host Fred Rogers. Hanks will portray Rogers in the upcoming film, ?You Are My Friend? set to release in November 22, 2019. The film will follow the story of a reporter who develops an emotional bond with Rogers (because who wouldn’t?) while profiling him for a magazine.

The 62-year-old actor is seen happily smiling at the camera in a bright red sweater, pulled over a button-up shirt and khaki pants, similar to what Rogers is remembered for wearing. Hanks’ transformation is beyond adorable, as he sports the gray dyed hair and eyebrows, giving Roger?s the personality of a lifetime.

To make things even better and more emotional than they already are, throughout the years Rogers said he was a big fan of Forrest Gump. According to his son, John Rogers, the family is excited to have the two-time Oscar winner to portray his father, after Rogers watched the film more than 100 times, which makes us believe Hanks was destined to play Rogers.

According to director Marielle Heller, the film focuses on Rogers’ unlikely friendship with award-winning journalist Tom Junod, who wrote a profile piece about the host for Esquire magazine in 1998. TriStar Pictures described the film as a ?heart-warmer? in which a journalist begrudgingly accepts an assignment to write a profile piece on the icon and “finds his perspective on life transformed.”

Rogers is known around the world for his beloved long-running children’s series, “Mister Rogers? Neighborhood“, and was the subject of the documentary “Won’t You Be My Neighbor?”, which premiered at this year’s Sundance Film Festival. Throughout his lifetime, Rogers received 40 honorary degrees, a Presidential Medal of Freedom, and a Peabody Award. He was also inducted into the Television Hall of Fame, was recognized in two congressional resolutions, and was ranked number 35 of the TV Guide?s Fifty Greatest TV Stars of All Time.

Editors Note: This post was originally published on July 22, 2019.