Here’s What Donald Trump Eats In A Day 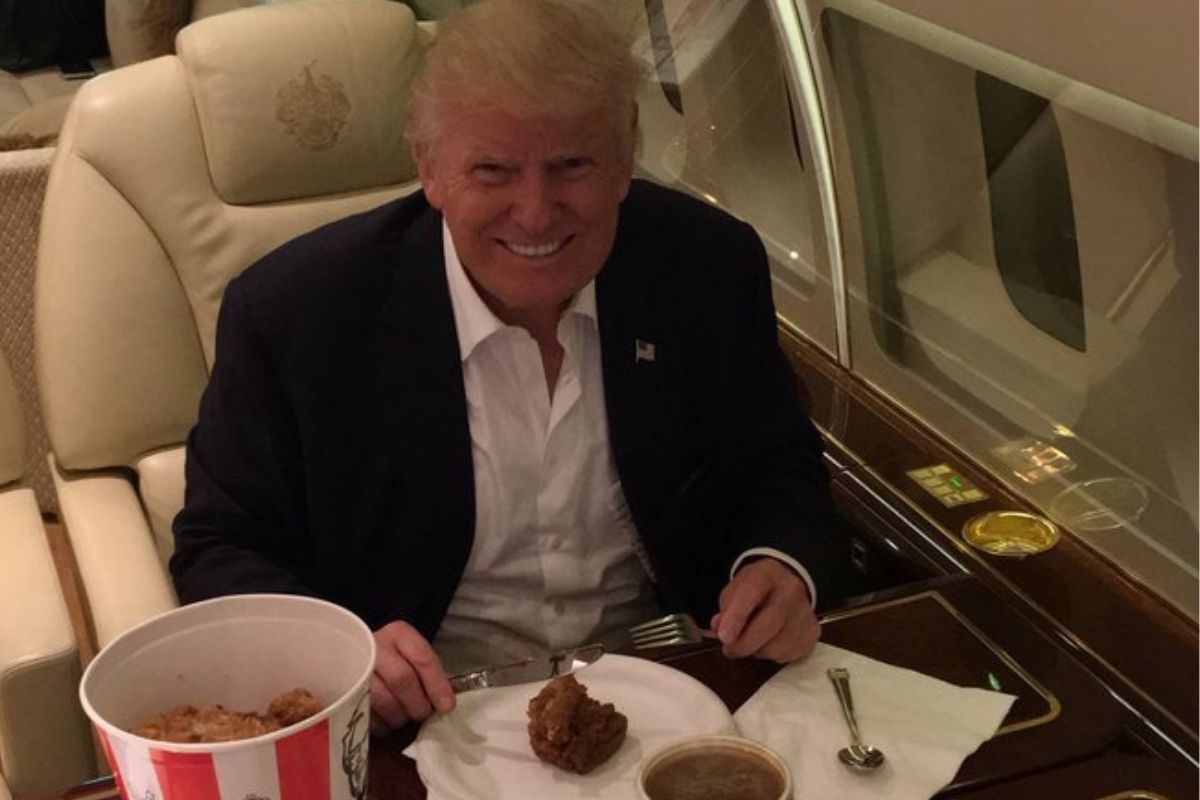 Have you ever wondered what President Donald Trump eats in a day? Well, wonder no more…I have found your answer! As I was roaming around the internet, as I do on a daily basis, I found this very unusual yet hilarious youtube video that frightened me. Not because it was scary, but because of all the unhealthy items that our president eats on a daily basis. According to Vice, he has mentioned his love for fast food, such as fried chicken from KFC, Burger King, Big Macs from McDonald’s, and Popeye’s numerous times.

I guess it’s safe to say that he really doesn’t care what he eats, and basically just eats what he’s craving. Period. Somehow, Buzzfeed was able to get a hold of Trump’s diet in a day, and let me tell you, this is insane. One, because the calories he consumes a day are triple of what I usually intake, and two….this man apparently drinks 12 Diet Cokes in one day. Yes, 12 Diet Cokes, you can consider the Cokes as part of his major food groups. Good lord, his pee must come out bright orange.

Anyways, Buzzfeed was able to find out what Donald J. Trump eats pretty much every day with the help of The Washington Post, The New York Times, and CNN. Which I mean, all seem trustworthy to me, so I’ll take it. Buzzfeed decided to take it a step further, and well, decided to eat everything he did. The duo starts with breakfast, showing them eating an egg McMuffin with a side of, yes, you guessed it, Diet Coke. Which I mean, this is sort of normal, I guess?

Some of us like to indulge some McDonald’s breakfast now and then, so yeah, this seems reasonable. I’ve also been guilty of drinking a Diet Coke for breakfast, so no judging in that one. Around noon, the duo is then given their first snack, which contains some Vienna Fingers Creme Filled cookies, with another Diet Coke. Because apparently, Diet Coke is life.

For lunch, the president likes to eat some McDonald’s, which is not a shocker. He’s talked about how much he loves the filet-o-fish from Mickey D’s and quarter pounders. So yes, for lunch, the duo had two-quarter pounders and two fish sandwiches, with no bread, smothered in ketchup. On days where he feels like eating something else rather than McDonald’s, he’ll eat some tasty pizza. BUT, he does leave the bread aside, and scraped the toppings off, because well…why not save some calories.

For another snack, the president doesn’t believe in vegetables and fruit, and rather opts for the sweet stuff. He indulges in some Oreos and potato chips, like a true kid. This is like a toddler snack, but okay we’ll take it. Oreos are tasty. To finish the day, President Trump then eats a well-done steak (yuck) smothered in gravy, a salad slathered in Roquefort dressing with bacon crumbles, and some pasta. As for dessert, a Chocolate cream pie with two scoops of vanilla ice cream, and yet another Diet Coke.

My lord. So, there you have it, that is what the President of the United States eats in a day, and I have to admit, I don’t recommend anyone try this. Use this information as you wish, let Trump be Trump. The poor White House chef must be going mental making meatloaf sandwiches left and right. I wonder what Melania’s eating habits are? I bet she isn’t one to enjoy some tasty Kentucky Fried Chicken or Wendy’s.