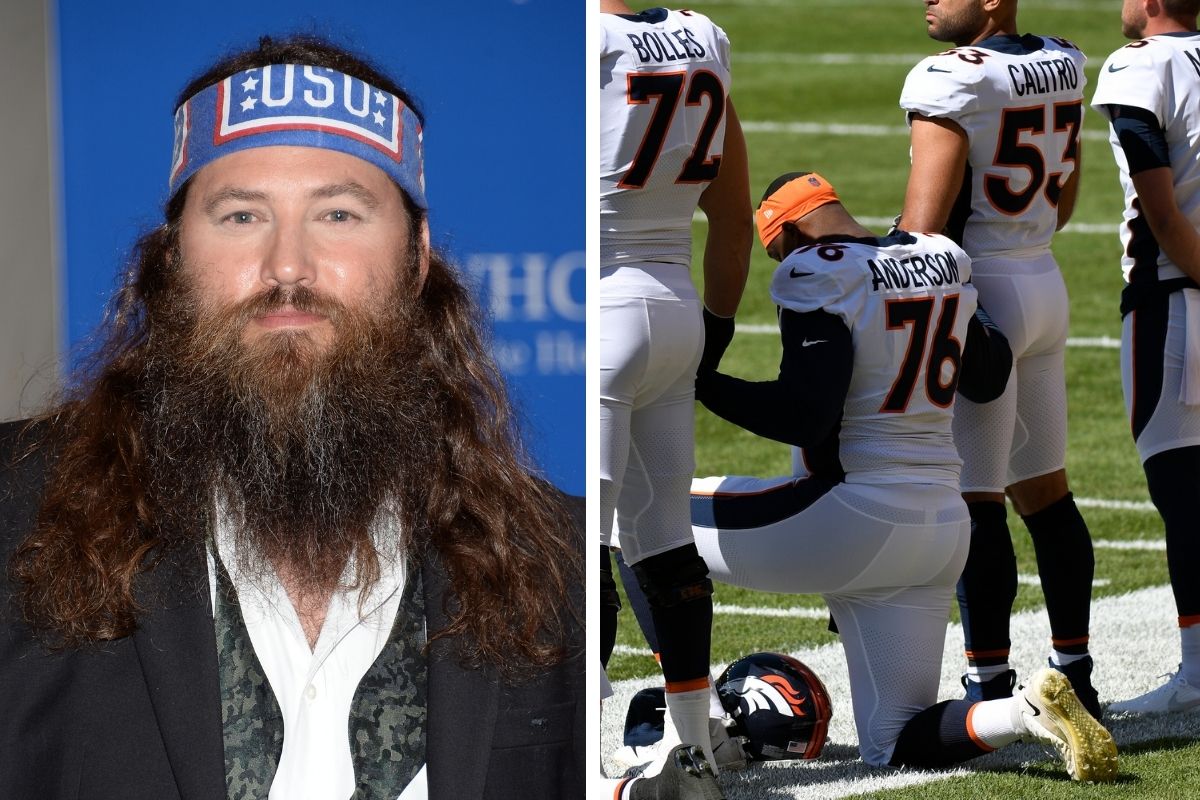 Willie Robertson and his wife Korie Robertson have created quite the platform since their days as Duck Dynasty stars. The former reality TV celebrities have raised their family members amidst the public eye, building their social media platform on living the typical American dream. And on their Facebook Watch series, “At Home with the Robertsons,” the couple debated the issue of NFL players kneeling for the national anthem with former NFL players Arian Foster, Michael Thomas, and Nate Boyer.

According to Fox News, the discussion was aimed to help the couple understand the purpose behind players kneeling at football games while the national anthem is playing. The movement was first started in 2016 by Colin Kaepernick who had chosen to kneel in protest, drawing awareness to systemic racism and police brutality in the US. Controversy and outrage poured out from his actions, as some criticized that not only were the anthem protests disrespectful to the flag, but also the military members who do attend games.

Willie and Korie have a Black son, which drove Korie to wanting to understand the racial aspect of the protest. She had no problem admitting that she initially thought kneeling for the anthem was disrespectful, but also explained how she is determined to understand. She said, “The guys made the point that this is not hating America. This is a specific protest about police brutality and injustice against Black people. Once that came out and that message was kind of understood, people were more accepting of it, where at first it just felt like a total, just like, rejection of America and the values that we hold.”

Her perspective changed a little following the death of George Floyd, understanding that the focus of the protest kneeling has more to do with systemic racism and police brutality. However, Willie still doesn’t understand the reasoning. He said, “Personally, I don’t have a problem if someone wants to wear a logo or something,” he said. “It’s when they got to the flag, of choosing that exact time to make your protest, I just felt like the flag should really bring us together… yeah, that just feels a little un-American.”

He continued on explaining how he thinks football games aren’t exactly the best places and times to protest, because of how little amounts of people are actually thinking and wanting to hear about politics during those moments. He said, “I understand, though, wanting to change for sure,” he said. “It’s just like, is that the best time? You know? The flag and even, for me, football. When I watch football, I don’t want to be thinking about who the president is and what the politics are. I just want to watch either my favorite team or two teams go after it.”

Korie and Willie Robertson on Raising a Black Son in America

Thomas, however, presented the argument that professional football players are actually seen by politicians and leaders, regardless of race, and that as a Black professional athlete, it’s his responsibility to highlight problematic issues within the Black community. He said, “Everybody who took a knee, everybody who was fighting for social justice and using their voice and platform,” he explained. “We were just trying to say, ‘Look, if we’re looked at as leaders in our community, and we can talk about, you know, stopping domestic violence; we can talk about, like, you know, raising awareness for cancer, anti-bullying and stuff like that, when it comes to issues in the African American community, why can’t we be the leaders and the champions of that as well? And use our voice and platform and do it?'”

And Foster explained, “If you look at the history of this country, it was literally founded on protests, you were literally running from Britain right? You were protesting taxation, this is what this country was founded on was protests. So to say protesting is inappropriate at any time is just to me a lack of understanding of how this country even got started … there’s nothing more fundamentally American than a protest.”

Although both understood where Willie was coming from, they addressed how protest is supposed to be uncomfortable and how people will always be in opposition. The conversation then concluded with Korie explaining how these topics are important to discuss and emphasizing that there’s nothing wrong with talking about something that doesn’t feel right to you.