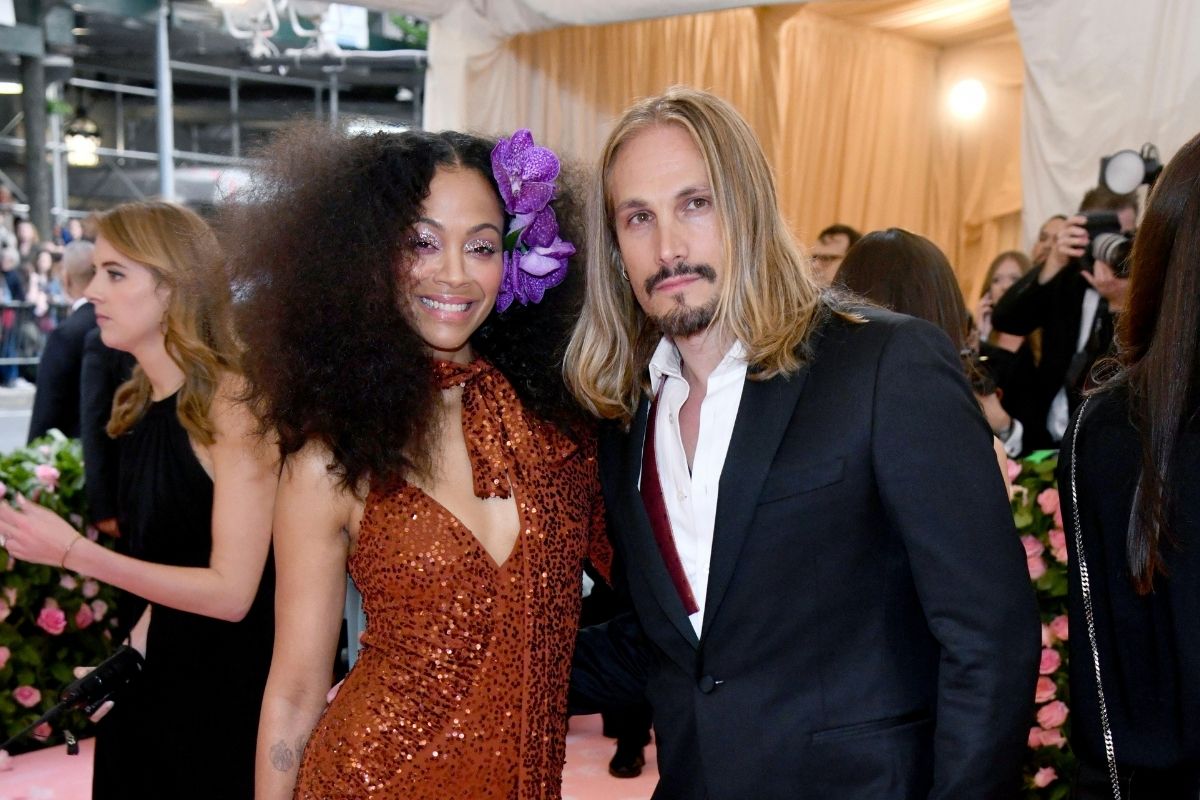 Actress Zoe Saldana has one of the more wide-ranging careers in Hollywood and she has a fabulous partner in her hubby artist Marco Perego-Saldana, who is just as adventurous and non-traditional as his famous wife. Saldana debuted in the classic 2000 dance movie Center Stage and co-starred alongside Britney Spears in Crossroads. She played a pirate in Pirates of the Caribbean: Curse of the Black Pearl, portrayed a string of iconic sci-fi heroines, including Neytiri in Avatar, Nyota Uhura in the Star Trek reboot series, and Gamora in Marvel’s The Guardians of the Galaxy and Avengers series. She even took the role of singer Nina Simone in the 2016 biopic Nina. In 2013, she met Marco Perego on a flight from Los Angeles to NYC, and it was love at first sight. They were married within months.

In an interview with USA Today, Saldana described the couple’s romantic origin story: “I just saw him from behind. It was 6:30 in the morning, I was on a flight to New York. And I can’t even describe to you, it was a vibration. He turned in that moment, because he felt the vibration as well.” Perego is an Italian artist who, per the Observer, moved to New York in 2002 after an injury derailed his career as a professional soccer player. He took a job washing dishes in Hell’s Kitchen and began painting in earnest. After getting encouragement from art expert and Sotheby’s employee Gilda Moratti, who bought one of his paintings, he put together his first show in Milan, Italy and sold his work for an average of $3000 apiece; the late designer Giorgio Armani was one of his first customers. By 2007, his paintings and sculptures were selling for as much as $30,000 and his gallery shows attracted actors and models. By the time he and Zoë met, he was a well-established, well-respected artist with the nickname “Pirate Perego” due to his long hair, goatee, and bohemian style.

The couple secretly wed in a private ceremony in the summer of 2013 and husband Marco Perego took his wife’s name, officially becoming Marco Perego-Saldana. Saldana addressed the unusual choice in 2017, telling InStyle “I tried to talk him out of it. I told him, ‘If you use my last name, you’re going to be emasculated by your community of artists, by your Latin community of men, by the world.’ But Marco looks up at me and says [she puts on a cute Italian accent], ‘Ah, Zoë, I don’t give a sheet.'” This led to an online debate regarding his decision, and the couple took to social media to release a joint statement, per Oprah Daily, announcing “Men, you will not cease to exist by taking your partner’s surname. On the contrary—you’ll be remembered as a man who stood by change. I know our sons will respect and admire their father more because their father led by example.”

The Perego-Saldana family have three children. Zoë confirmed her first pregnancy in 2014 by showing off her baby bump in a video responding to the Ice Bucket Challenge, per Hello magazine. Twins Bowie Ezio and Cy Aridio were born in November of 2014 and Saldana wowed everyone at the Academy Awards two months later when she walked the red carpet in a “stunning peach-colored Versace dress,” as reported by Harper’s Bazaar. Third son Zen was born in 2017. The couple is raising their sons in a gender-neutral environment, which includes “incorporating toys marketed towards girls and boys in their household” and, as Saldana told Us Weekly “my husband participates in a lot of tasks that were normally given to women and vice versa. I get to do a lot of male things, which is, I don’t know, put the TV together, fix things that break. We’re sort of a very gender-fluid household. I think it’s important to raise boys in that environment, and girls as well.”