This Creepy Clown-Themed Motel is Right Next to a Graveyard 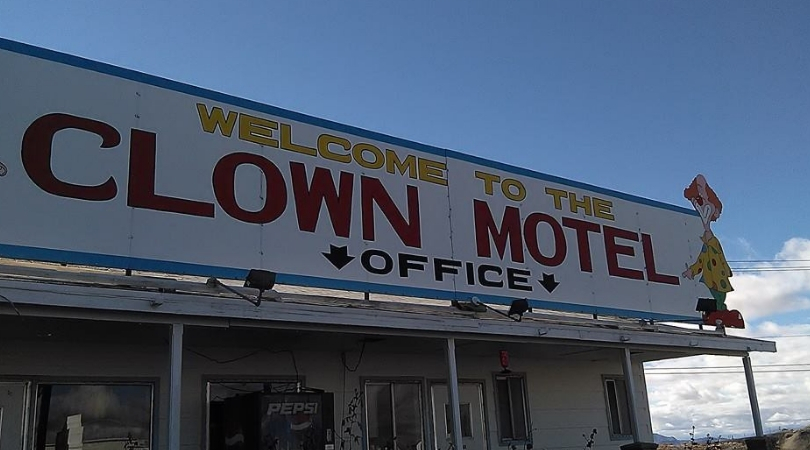 ?The clowns love me, and I love them. That?s why I?m here. This is my destiny.? These are the words from Hame Anand, the new owner of what might be the scariest motel in America. Behold the Clown Motel. He bought the Clown-themed motel after owner Bob Perchetti announced he was selling the property. It looks like it may have been passed down to the right person!

Clowns! Hundreds of clowns perch on shelves at The Clown Motel in Tonopah, Nevada. Not scary enough? This motel is also dubbed “America’s Scariest Motel” due to its proximity to the Old Tonopah Cemetery—which shares the same parking lot. Nevada // October Series

If you’re wondering if the Clown Motel is exactly what it sounds like…it absolutely is. But not in the scary. the Clown Motel is simply a place to have a solid night’s rest with friends. Friends that happen to be clowns. Because there are clowns EVERYWHERE. Stuffed, ceramic, lining counters, sitting in chairs, and hanging on the walls. There is even a life-size Ronald McDonald hanging out!

If you’re into clowns, this is the place for you. If the idea of a Clown Motel only seems barely scary, consider booking a room that faces the old Tonopah Cemetery, it’s right next door. The cemetery might actually be haunted due to a mining accident that claimed the lives of seventeen people.

If you happen to find yourself on a road trip between Reno and Las Vegas in the middle of nowhere and you need a place to stay, hit up the Clown Motel. It’s a hot spot with road trippers and truckers alike.

If this locale seems too far but you want to support it, we’ve got news for you! The Clown Motel essentially has a slogan, “send in the clowns” that clown enthusiasts from around the world take entirely too literally. So, if you, too, would like to send a clown to Tonopah, Nevada– do it! The new owner, Anand, is cooking up new ways to get the clowns more involved.

A clown-themed cafe, anyone? Anyone?