The Bizarre History Behind the Emma Crawford Coffin Races 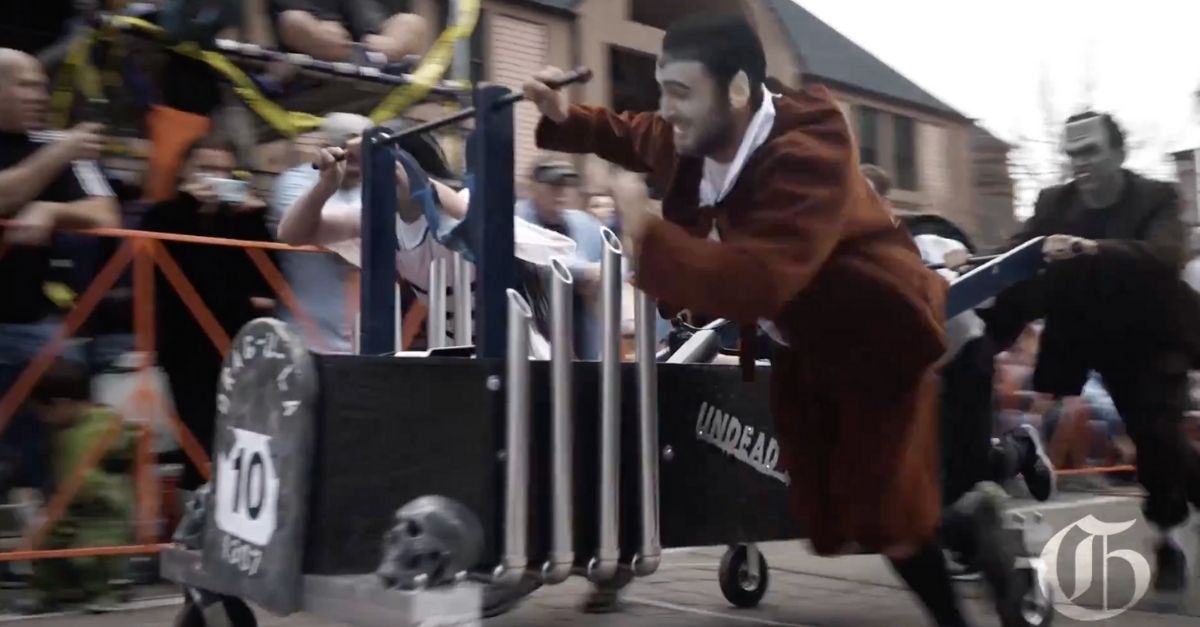 People go visit Manitou Springs, Colorado, to check out the history and culture behind the city’s quirky and nonconventional ways of healing, but also for a special event specifically held around Halloween time. If you’ve never heard of their famous annual Emma Crawford Coffin Races, then what you’re picturing in your head right now, is exactly what it sounds like.

For 25 years now, the Manitou Springs Chamber of Commerce has held its annual coffin races in honor of Emma Crawford, a “beloved member of the community.” In 1889, Emma Crawford arrived in the mountain town of Manitou Springs, looking for a cure for her tuberculosis. With Manitou Springs known for its cold-water mineral springs, she was hoping that the healing waters would make her better.

During her search, she not only fell in love with the town, but also with a civil engineer on the Pikes Peak Cog Railway named William Hildebrand. In 1891, as her sickness took over, she revealed her dying wish was to be buried on top of Red Mountain. William, who loved her so deeply back, honored her wishes, and with the help of 11 other people, carried her coffin up 7,200 feet to bury her at the summit of Red Mountain. Sweetly romantic, right?

Well, in 1929, the years of harsh winters and spring rains caused a bit of a nightmare, and Emma’s remains along with her coffin came rushing down the mountainside. All that was left when she was found, which was by young children, were the casket handles, a nameplate, and some of her bones. Luckily, they relocated her coffin to Crystal Valley Cemetery, so she could still be honored after the horror that just happened.

To preserve her memory, the Manitou Springs Chamber of Commerce created the Emma Crawford Coffin Races & Festival, where contests of all kinds are held. Teams dress up in the craziest costumes and race coffins up Manitou Avenue to see who could have the best coffins or fastest times. It’s a massive event that people from all over come into town to celebrate their Halloween.

So what are the details for this hilarious and wild experience? Each team (and there tends to be 50+!) decorates a coffin with a theme. Four team members push one team member deemed “Emma” in a coffin up Manitou Avenue to the “final resting place” which is the finish line. Bystanders get to watch racers go two coffins at a time to win the coveted Coffin Cup, and there’s also a parade and live music in downtown Manitou Springs.

Some say that Emma Crawford still haunts Red Mountain for those who dare to hike it. It might be terrifying to escape to Colorado for some fresh mountain air and to suddenly see her ghost. But in order to really see her, the Emma Crawford Coffin Races & Festival might be the best way to do it.

Watch: ‘Let Me Out!’: Grandfather Gets the Last Laugh After ‘Waking Up’ at His Own Funeral