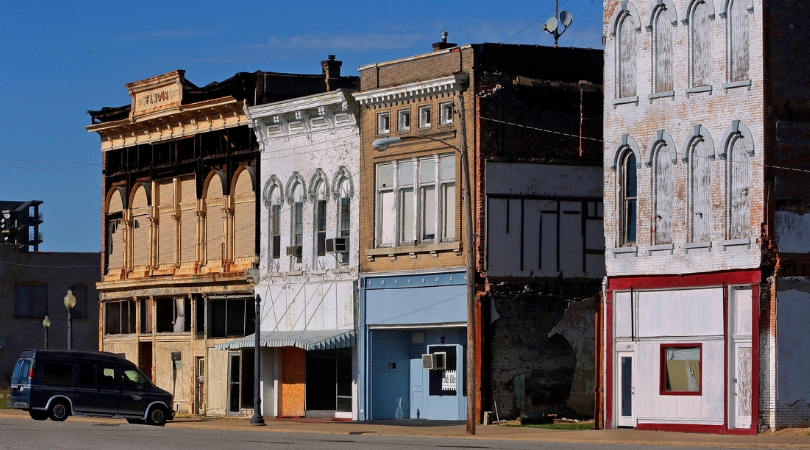 The city of Cairo is both the southernmost part of Illinois is and the point where the Ohio River and Mississippi Rivers meet. At one point the Cairo, Illinois was called “The Gateway of the South.” But today, the city is all but forgotten, but it’s trying to re-emerge.

Being the southernmost town of Illinois, Cairo, it is actually pronounced “Care-o”. There is a rumor that the locals from surrounding areas say that they don’t “care-o” about it. The 150-year-old city is at the very bottom/seat of Alexander County. The historical city is part of the Cape Girardeau? Metropolitan Statistical Area and was once the home of Fort Defiance during the Civil War. In 1862 General Ulysses S. Grant wanted to control access to the river, and Cairo was the best option, being the confluence of the Mississippi. The name of Cairo city references Egypt and is in the part of Southern Illinois referred to as “Little Egypt”.

I took a trip to Cairo, IL yesterday (CARE-oh) after hearing of houses selling for $700 from @derik_hultquist and @lukedanielpreston. I had lunch at the only diner in town, met some locals, befriended the librarian and got a tour of the Customs House Museum (open only from 10:00-12:00). . . I found out a lot about the town, located where the Ohio and Mississippi rivers cross streams, whose population peaked in the 1920s at around 15k people and currently stands at about 2200. A lot of the old structures are still intact; a ghostly facade of a once bustling township. . . A slow and steady economic decline coupled with a racial division in the late sixties brought about the dwindling population. I won’t be buying a house here soon, but I’ll DEFINITELY be back to visit. This has been history with Chuck. More to come. #historywithchuck #cairoillinois #letsride

Many, like Charles Dickens, visited the town of Cairo and thought it had potential. It served as the backdrop for the City of Eden in his 1842 era work Martin Chuzzlewit. A group of investors from the Cairo City Property Trust wanted to make the city a terminal in the Illinois Central Railroad. The town was also a naval station during the Civil War. The Historic Downtown Cairo holds architectural gems of original brick buildings from the 1900s.

In short, a few major things led to the 13k person city becoming a near ghost-town. There were very high racial tensions. Segregation was very aggressive in the post Civil Rights Movement 1960s. Two sides created “The White Hats” (white community) and “Cairo United Front” (black community) and opposed each other regularly. From Lynchings to street brawls, the city could not seem to come to peace. It was being torn apart from the inside.

Next, the economic decline of the city of Cairo came when the Illinois Central Railroad bridge and Cairo Mississippi River Bridge was completed. This took away many jobs and pushed workers out of the area for work since the ferry no longer supplied employment.

The final shutdown of the little town was the 2011 flood, which is to be expected from time to time for a city surrounded by levees and rivers. The town is now only home to around a couple thousand people. The town is working to rebuild itself tp prevent further abandonment. Landmarks are being rebuilt and a plan is in the world to cultivate interest around its historical and geological importance, hoping that tourism will help mend the dwindling economy.