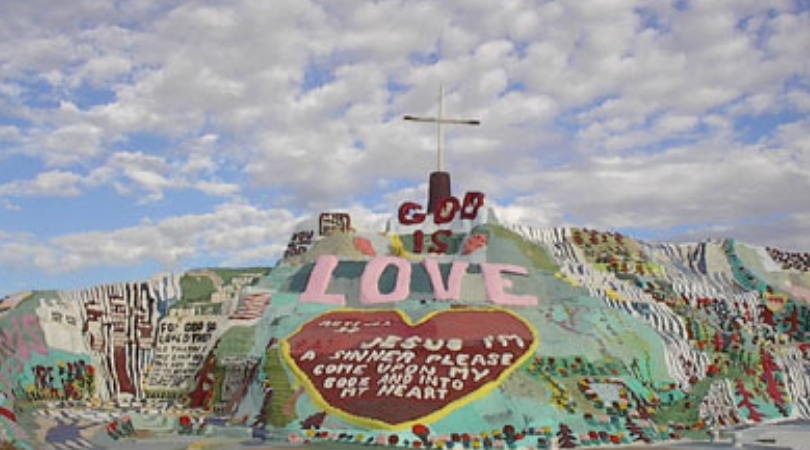 Leonard Knight was a man with a dream, and with a prayer. That prayer was for a hot air balloon. Instead, we ended up with the [arguably much cooler] Salvation Mountain.

A post shared by Salvation Mountain (@salvationmountainofficial) on May 17, 2019 at 12:37pm PDT

In 2002, Barbara Boxer, a California Senator, called Salvation Mountain a unique and visionary sculpture a “national treasure… profoundly strange and beautifully accessible, and worthy of the international acclaim it receives.” Which is pretty accurate. The structure isn’t actually a proper mountain. Rather an art installation and “visionary environment.” Believe it or not, it has it’s over 100,000 lead-free gallons of paint.

Salvation Mountain is located just outside of the ‘last free place in America’ otherwise known as Slab City, in the Southern California Desert. For reference, it isn’t too far from the Salton Sea and just a few miles northeast of Niland, the closest real city to Slab City.

The installation is technically the second site of Salvation Mountain. The first was started in 1984 and was unstable and collapsed. But Knight, a newly born Christian, decided to thank his new higher power for letting him know his first effort wasn’t safe and challenged God to help him build it, essentially. What made him want to build this? Technically, it wasn’t his goal. As mentioned earlier, Leonard Knight was hoping for a hot air balloon. He wanted a way to share his new take on life “God Is Love” with the world.

It is the perfect time of year to road trip out and visit Salvation Mountain! We are accepting paint donations all year round. Any colors are helpful and needed but bright colors are the favorite!

A post shared by Salvation Mountain (@salvationmountainofficial) on Nov 11, 2018 at 8:17am PST

Apparently, he waited a whole decade for that hot air balloon before he decided to push forward with his dream project so he could be ready for when his time came. At the time Knight, 36, was living in his van. He started sewing together patchworks of fabric for the balloon. He continued his road trip and sewed until he ended up in the town of Niland, California, where he decided he was going to launch the hot air balloon. He, unfortunately, he had to discard the patchwork project after fourteen years with no balloon and tattered fabric scraps.

Knight decided to spend a week in Niland and make a cement balloon as a tribute to his small project. That week turned into years and a 50-foot project containing donated paint (paint from a nearby dump) and cement, sand and junk. This is when his hard work form years literally collapsed and he said, “Now God, You build it.?

A Message of Love

Really great picture by @kteeadventuring Thanks for sharing! Tag a friend that should know about Salvation Mountain!

A post shared by Salvation Mountain (@salvationmountainofficial) on Mar 5, 2018 at 3:50pm PST

The next time around he (along with God, according to him) built it smarter. With the use of native adobe clay and straw, a tip from Najavo friends nearby. This and the gallons of paint he used made the structure sturdy. So sturdy, in fact, that when imperial County attempted to bulldoze Knight’s life’s work a few years back, it didn’t budge.

Leonard Knight died in 2014. He worked on Salvation Mountain until he did. His life’s work has been portrayed in movies and shows. People taking road trips to Slab City come by the thousands from all around the world to see it. He achieved his goal of sharing a message of love with the world. If you want to plan a trip or learn more, feel free to visit the Salvation Mountain site here.