Texan Finds A Total of 45 Rattlesnakes Hiding Underneath His Home 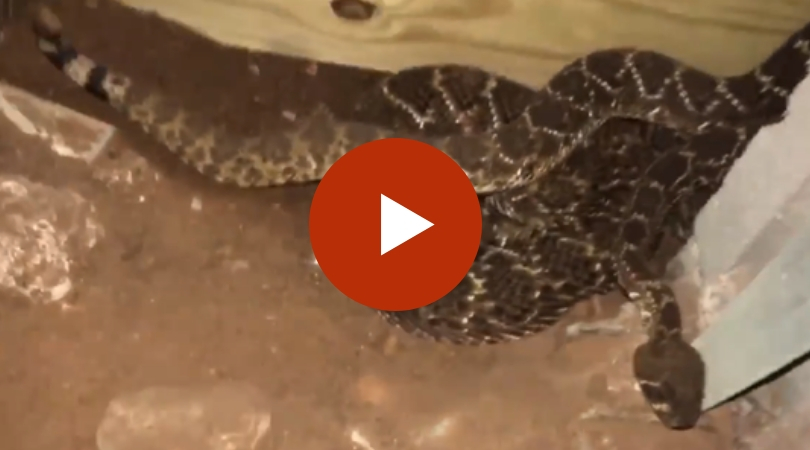 It looks like a man from Albany, Texas didn’t realize he had a “slithering problem” under his house until he decided to look under his Texas home! The North Texas homeowner allegedly crawled into a dark space under his home, to see why his cable television service was acting up. After discovering what he thought was dozens of rattlesnakes, he quickly crawled back out of that crawl space.

When Nathan Hawkins, owner of Big Country Snake Removal company arrived, he and his colleagues were shocked to see that a “handful of snakes” were actually a total of 45 live snakes! Not just any regular snakes, but rattlesnakes. Yes, the most Texas thing you could ever imagine.

The company was shocked at the amount, that they decided to document the harrowing removal on a Facebook post through their Facebook page, which lasted a total of 18 minutes! According to the company, this is actually normal. Rattlesnakes don’t care about the location they gather, rather they care about survival so they usually stick together anywhere and anyway they can. The longest snake removed from the premises was more than 5 feet long.

If you think this is bad, in 2017, the company removed a total of 88 snakes from underneath different homes. Usually, they remove 2,000 snakes a year which is pretty terrifying. Snakes, regardless if they are rattlesnakes or not, begin to crawl under homes and dark spaces as the weather warms up, which increased the risk of snakebites. According to officials, on average, one to two people die in Texas each year from venomous snake bites.

It’s important to note that you should never try to remove a snake by yourself, especially rattlesnakes since they will attack immediately if they feel like they are in danger. Experts state the best way to avoid a bite if to freeze and slowly move away when the rattlesnake seems uninterested. If a rattlesnake is in a position where it feels a threat, the best way to avoid an attack is to stop all movement, throw something they can get distracted with, and move away slowly to avoid it from feeling trapped or threatened.

Even though the camouflage can be nearly perfect on a variety of soil types, rattlesnakes at homes are very often sitting right out in the open. This one, found in the Phoenix area, is doing what they typically do.⠀ ⠀ #rattlesnake #snake #arizona #az #wildlife #conservation #phoenix #tucson #scottsdale #explorearizona #azherps #instagramaz #wildsnakes #animal #animals #rattlesnakesolutions #reptilesofinstagram #nature #snakesofinstagram

A post shared by Rattlesnake Solutions (@rattlesnakesolutions) on Mar 20, 2019 at 6:00am PDT

If bitten, it is important to remain calm at all times. Snake venom travels slowly through the body, and surprisingly enough, most deaths from rattlesnake bites are caused by shock rather than the venom itself. Why? Well, when scared, our heart rate goes up, which means that our blood flow increases. This causes the venom to flow throughout your body faster. So, take a deep breath, try to stay as calm as you can, wash the bite area with soap and water or if you have an antiseptic wipe, clean it thoroughly.

Even though the camouflage can be nearly perfect on a variety of soil types, rattlesnakes at homes are very often sitting right out in the open. This one, found in the Phoenix area, is doing what they typically do.⠀ ⠀ #rattlesnake #snake #arizona #az #wildlife #conservation #phoenix #tucson #scottsdale #explorearizona #azherps #instagramaz #wildsnakes #animal #animals #rattlesnakesolutions #reptilesofinstagram #nature #snakesofinstagram

A post shared by Rattlesnake Solutions (@rattlesnakesolutions) on Mar 20, 2019 at 6:00am PDT

If you have access to a phone or are close to someone who was not bitten, then ask for help. It’s also important to remove any item of clothing or jewelry that could restrict the swelling of the pit area. This avoids pressure on the wound or restriction of the blood. Most importantly, if bitten, you DO NOT elevate the bite above heart level, suck the venom from the wound, apply ice, apply pressure to the wound with any bandages or wrap, and do not go after the snake by yourself.