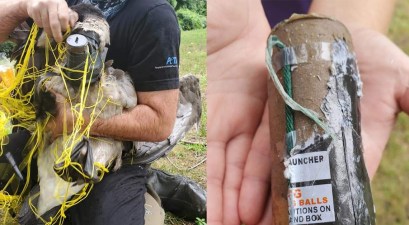 With the deadly flames of the Tubbs Fire approaching, Roland Tembo Hendel knew it was time to gather his family and its pets and get out of there. But a beloved family dog by the name of Odin refused to flee the homestead, choosing instead to stay behind and protect a herd of goats while the rest of the family evacuated the area.

“By 11:10 we could see the first of the flames across the valley,” he wrote in a Facebook post. “By 11:15 they were growing larger and the winds went mad. We had loaded up the dogs and cats, but Odin, our stubborn and fearless Great Pyrenees would not leave the goats.”

Remarkably, after a few days, when much of the smoke had cleared, the Hendels returned to the charred remains of their home and were shocked to find “a burned, battered, and weakened Odin surrounded by his eight goats,” Hendel wrote on the family’s YouCaring crowdfunding page.

RELATED: A frantic search for the family dog after wildfires destroyed their home ended in pure joy

“He appears to be getting stronger, and his sister’s presence will surely help to lift his spirits and take some of the burden off his giant shoulders,” Hendel on a separate Facebook update, written after the family was reunited with their plucky canine friend.

The family set up the crowdfunding page so that the goats can have a rebuilt barn “before the winter” so that Odin’s “bravery and sacrifice are not in vain.”