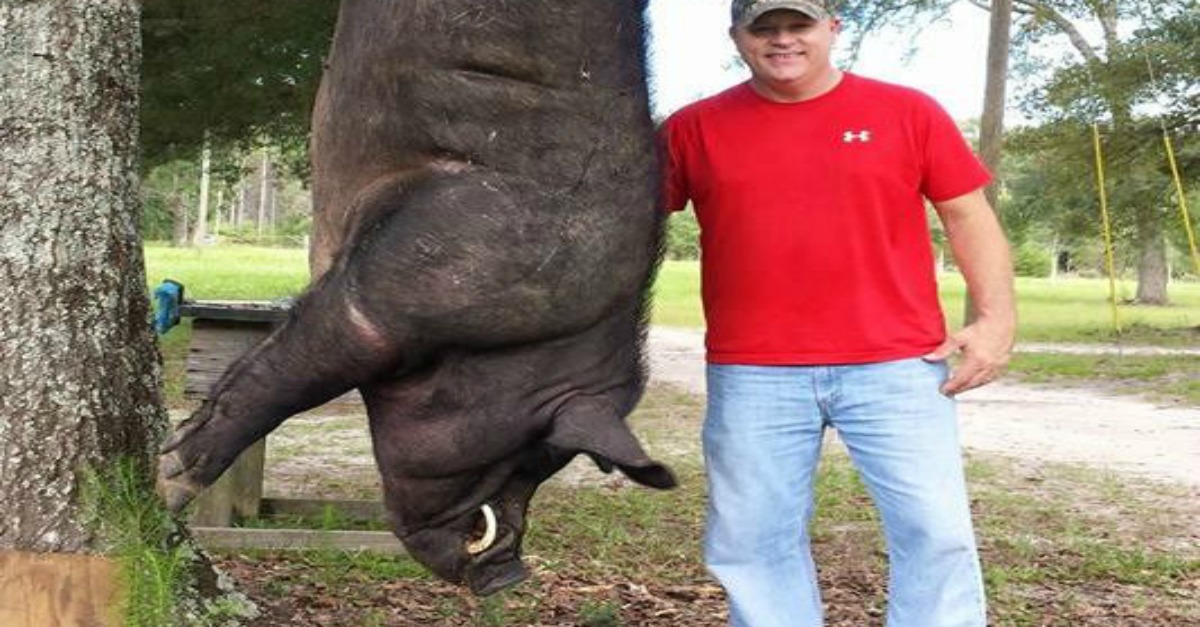 Wade Seago’s pet schnauzer, Cruiser, wouldn’t stop barking recently at his home in rural Alabama. So Seago went to the window to see why. What greeted him on his front lawn was almost too insane to believe.

An 820-pound hog — with six-inch tusks — was standing right there on his property.

“Cruiser had this huge hog confused with all of the barking and movement,” Seago said. “It was not a good situation.”

The Alabama man did not hesitate. He grabbed his .38 caliber handgun and shot the feral hog dead.

Despite it taking three shots to kill, Seago does not regret his actions.

“I didn’t think twice about taking down this hog,” Seago said. “I’d do it again tomorrow.”

Seago is an avid deer hunter and runs a taxidermy business. While he says hogs are prevalent in the area, he had never seen one this size until now.

1. That’s not from our current version of Earth. That looks like it walked through a wormhole that opened up ten million years ago and accidentally strutted onto this guy’s front lawn. That shouldn’t be real. Can anything other than a human being kill a hog like that in North America? I guess a whole pack of wolves could, but it feels like one mountain lion by itself would be totally outmatched. I’m betting against a pack of coyotes being able to do anything here either.

2. It’s easy to forget how much of a America is still technically wilderness, because hogs like this (though not quite this big) are everywhere. The amount of space and time it takes to grow this big is just stunning.

3. I’m surprised it only took three bullets to kill this thing, to be honest. Unless you get it right in the head or heart this thing looks like it could take a whole clip and keep chugging for at least a little while.

This story was originally published July 20, 2017.

Watch: HUNTER TRIES OUT A .50 CAL ON A FERAL HOG