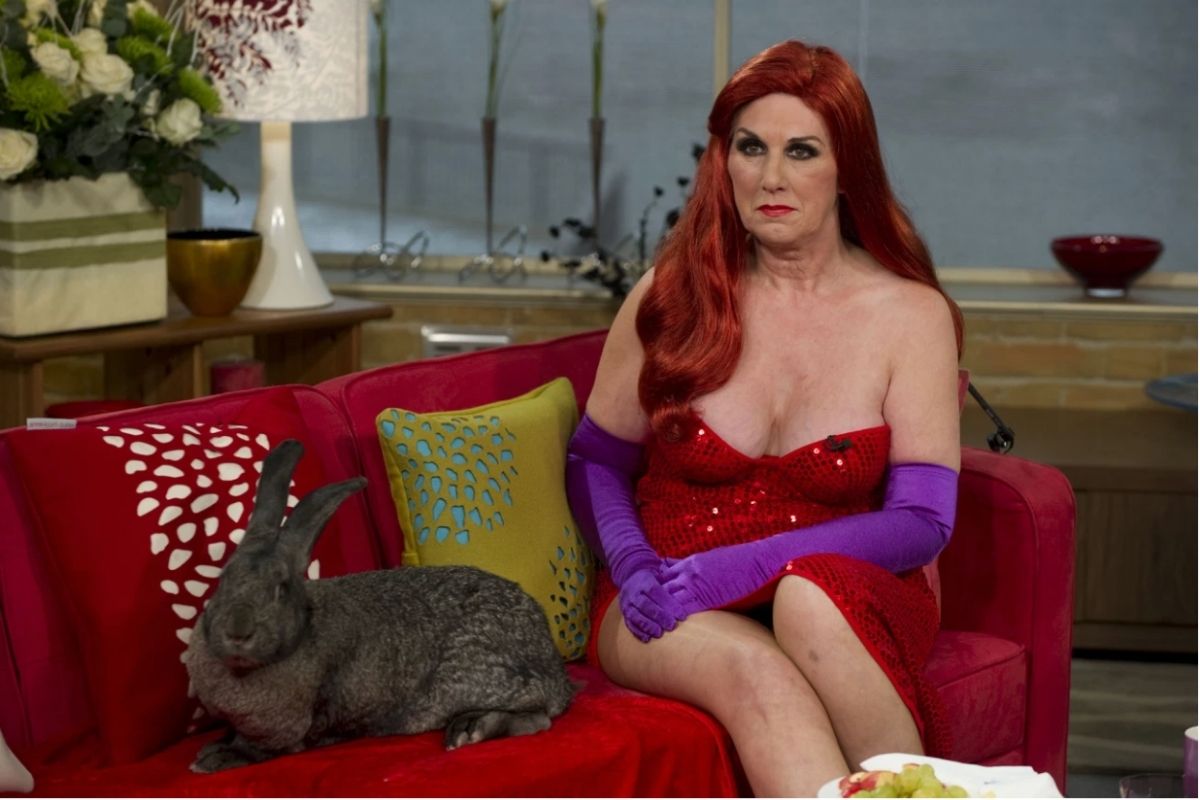 The world’s largest rabbit has been stolen from the Worcestershire home of owner Annette Edwards… who is also a former Playboy model. And this is not the first time the safety of Edwards’ rabbits has been threatened.

Model-turned-breeder Annette Edwards has a passion for rabbits. She breeds some of the biggest in the world, spending thousands of dollars on their diet alone. Raising gigantic bunnies is no small feat. Edwards’ dear Darius holds a place in The Guinness Book of World Records as the world’s longest rabbit, measuring in at four-foot-four.

But now Darius is missing. Last Saturday night unidentified thieves snuck onto Edwards’ estate in Worcestershire, England and snatched the ten-year-old Continental Giant Rabbit. At such a colossal size, it’s hard to imagine the thieves making off the giant bunny so easily. But indeed they did. And now Edwards is inconsolable. She’s offering a $1.3 thousand dollar reward for the return of the rabbit.

A West Mercia Police spokesperson told The Daily Mail: “We are appealing for information following the theft of an award-winning rabbit from its home in Stoulton, Worcestershire. It is believed the Continental Giant rabbit was stolen from its enclosure in the garden of the property of its owners overnight on Saturday, April 10 to April 11.”

According to a report from NBC’s Today Show in 2010, Darius was insured for $1.6 million and traveled with a bodyguard. So it seems extremely suspicious that Darius might truly disappear without a trace.

Annette Edwards also made an appeal on social media for Darius’ safe return, writing, “A very sad day. Guinness world record Darius has been stolen from his home. The police are doing [their] best to find out who has taken him. There is a reward of £1,000. Darius is [too] old to breed now. So please bring him back.” Edwards is right about her record-holder bunny. At his age, breeding is out of the question. So what are the thieves planning to do with the prized pet?

In 2017, Annette Edwards lost another rabbit — Darius’ son Simon — to mysterious circumstances. At the time, Simon was in play to become the world’s largest rabbit when he died suddenly on a United Airlines flight from London to America. Simon was then cremated by the airline without Edwards’ permission barring the possibility of an autopsy. Supposedly, Simon perished in the cargo of the plane but an anonymous source claimed that he’d mistakenly been left in a freezer overnight at Chicago’s O’Hare airport. Oh, Hare indeed!

The three Iowa businessmen who’d purchased Simon with plans to show him at the Iowa State Fair then sued United Airlines for an undisclosed sum. At the time, Edwards told The Sun: “The whole thing stinks of a cover-up.” At this point, I believe Edwards. It certainly seems like there’s some vendetta against the world’s biggest bunnies…

One more weird detail of this surprising story? Ms. Edwards is a self-proclaimed Jessica Rabbit impersonator. Reportedly, she’s received more than $13,000 worth of plastic surgery — including cheek implants, chin implants, and a breast lift — to look more like the cartooned sex symbol from Who Framed Roger Rabbit? The results speak for themselves.