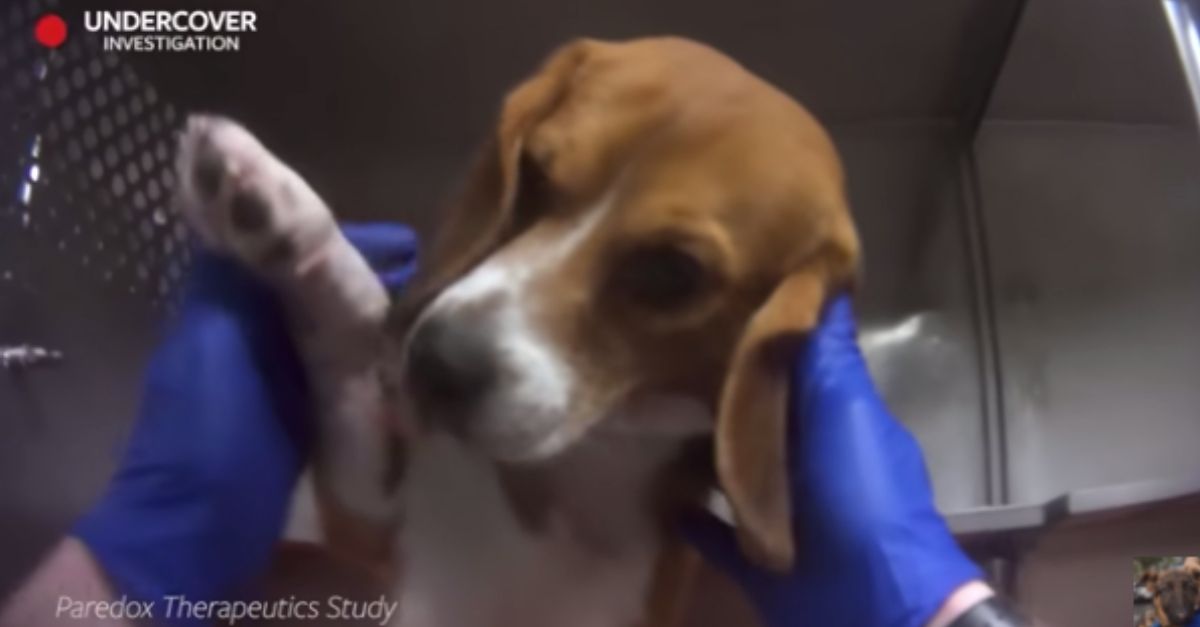 A shocking and disturbing video is being passed around on social media, as an attempt to stop the horrific events showing dogs being treated inhumanely. The footage comes from inside a Michigan laboratory, revealing the brutal methods that are being used on a dozen of dogs, as they are force-fed fungicide during a year-long animal testing experiment.

Fungicides are biocides chemical components or biological organisms that are mainly used to kill parasites fungi or their stopes and can cause serious damage to anyone who consumes them. According to the Humane Society of the United States, around 36 dogs are usually tested and fed fungicide, pesticide and several pharmaceutical products every day.

The video was reported as part of an undercover investigation by the Humane Society, where you see Harvey, a beagle, is being taken out of his stainless steel cage and is being used along with 21 other dogs for a study. One can see Harvey with a big surgical scar on his chest after he was reportedly opened and two chemicals substances were poured into him. While another beagle from the same study is being carried to another room for euthanasia, one of the lab workers states, “He’s gonna die.”

Unfortunately, that beagles, along with Harvey and 20 others did die. The Humane Society was able to find that the tests were sponsored by Paradox Therapeutics and financially supported by the University of Vermont, a public university that is funded with taxpayer dollars. Investigators spent nearly 100 days at the facility and documented the dogs in their cages with surgical scars and those implanted with large devices.

The dogs were being force-fed or infused with drugs and other products, using crude methods that are unlikely to be ever used by a human. Dogs underwent invasive surgeries, and some even had their jaw broken to test dental implants. Other were used by workers to practice procedures such as force-feeding and blood collection.

Now, I don’t’ have to remind everyone that treating these animals like this is not only wrong but inhumane and all of these companies should be ashamed of themselves. It should be illegal and punishable by law at any cost.

Unfortunately, several US companies such as the Food and Drug Administration, carry out several tests that provide tests on animals as part of the drug approval process. The Department of Veterans Affairs, National Institutes of Health, and the Center for Disease Control and Revelation usually carry out biomedical research on dogs, such as cardiac research, providing funding for experiments to be carried out at other facilities.

According to the Humane Society, nearly 60,000 dogs a year are used in testing for research in the United States, with over 6,500 dogs being held in laboratories but not yet used. For the Michigan laboratory alone, they used thousands of beagles and hounds last year to test several companies that sought federal approval for potentially poisonous products, like pesticides and pharmaceuticals. Harvey and the other dogs were bought from two major breeders, Covance Research and Marshall Bioresources. Beagles are commonly used in research due to their docile nature.

Marshall had around 22,000 dogs at its facility in New York at the time of the 2018 inspection of the U.S Department of Agriculture. While the Charles River Laboratory now has 36 bagels in its facility for a pesticide test commission by Dow AgroSciences which is also known as Cordova.

So, why is this a problem and what can we do to help? Simple. The problem is that the tests, which involves force-feeding dogs with various doses of fungicide each day for a year (I can never say this enough times for it to sink in), has been deemed as unnecessary. Yes, this has been even confirmed by Dow scientist and have actively advocated eliminating the tests in several countries.

What we can do to help these poor animals, and those who are “potential candidates” is asking Dow to immediate release the beagles and ending the test. The Humane Society has created a petition, which we must sign immediately, to demand that Dow halt these tests as soon as possible and release these dogs so they can be placed into loving homes where they will be safe.

Why? Because this is cruel and unnecessary. No animal should be treated this way, especially if they can’t fight back. Hey PETA, stop wasting your time telling people milk is a symbol of white supremacy and help out for once.