Bear Charges Down Woman and Dogs in Their Own Backyard 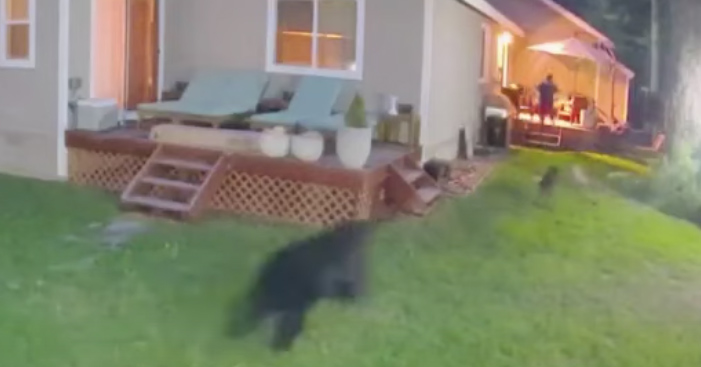 Lachmmie Coll-Gieg of South Lake Tahoe, California is fairly used to the idea that bears live in her area. But knowing bears are around is one thing. Being charged down by a bear — a bear that is a whole lot faster than you realized — is another thing entirely.

Coll-Gieg had let her dogs out into her backyard when she heard some more vicious barking than usual. When she came out to see what the commotion was, what she found was a black bear sprinting towards her as her two formerly very tough dogs were high-tailing back to the house. The whole thing was caught on her home security camera.

The bear stops short right at Coll-Gieg’s back porch, which is fortunate for everyone, because between the speed that thing was running and its sheer size, the NFL’s best offensive line couldn’t stop that monster. Fortunately, between the human and her two dogs there was only one injury. One of Coll-Gieg’s dogs clawed her American Bully, named Duchess, but she should be okay.

1. This would make me buy a shotgun. That’s just me, but I’d be at Shotgun Depot in the “anti-bear aisle” the next day. I wouldn’t really want to deal with a dead bear in my backyard though. That would be a real mess and a lot of questions from the county. So I’d probably buy some of those rock salt rounds or whatever. Make the bear remember that, “Oh that’s the house that hurts to go to.” Maybe he’ll tell all his friends too. Dead bears tell no tales.

2. Freakin’ tiny dogs, man. They’re all big and tough right up until they aren’t. And then it becomes your problem. Usually that just means apologizing to a neighbor that your Schnauzer ran up to and started barking/shrieking at in an attempt to make the intruder go deaf. But, apparently, sometimes it also means getting bum-rushed by a pissed off bear that could tear your face off of your skull faster than you can say, “THAT IS A BAD DUCHESS!”