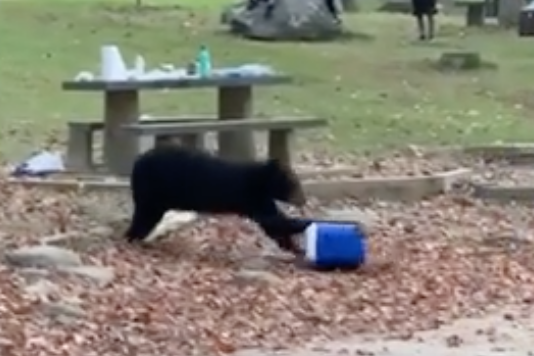 Campers and hikers alike watched pretty hilariously helplessly as this black bear popped up on its hind legs and smacked picnic cooler sitting unattended on a Tennessee park’s picnic table onto the ground. This guy really wanted some string cheese and Busch beer apparently.

Unfortunately for the cheeky bear, the blue container proved a little difficult to open. The bear is seen in the video smacking the icebox with its front paws and pushing it out of the seating area to the foot of a tree but, as the hilarious scene unfolds, it becomes clear that the cooler is both child and bear-proof, and the lid ultimately trumps the bear’s strength. The bear kept smacking at the cooler, getting the container upright before knocking it over again, but all to no avail.

Ultimately this was one picnic basket Yogi couldn’t swipe.

Obviously, because it’s the 21st Century and this is the United States, dozens of people were standing around filming the bear so they could post the video to social media in order to get an “lol” or two. Mission accomplished! Hopefully the bear was able to go back into the forest and find some apples or berries or, I don’t know, squirrel meat. Something yummy. It’s hard not to feel bad for the guy.

As far the cooler’s owner, you can now never throw that out. Owning a cooler with bear claw marks in it is pretty rad.

Watch: Curious Pup Gets His Head Stuck Inside a Pumpkin