Bobcat Gets into Dollar General, Goes on Shopping Spree 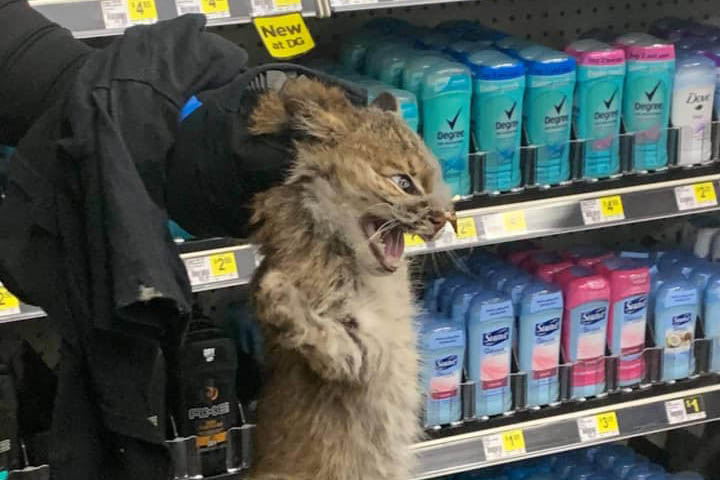 A Dollar General store in Martin, Kentucky was visited by a customer that makes Karens look downright pleasant. A wild, kind of angry bobcat.

The epitome of, “I don’t get paid enough for this” is a wild cat coming into the store while customers and other workers freak. Thankfully the Dollar General store employees seemed to handle the bobcat that paid them a visit Wednesday evening pretty well. It definitely wasn’t inducing Halloween level scares. They called the cops and everything was taken care of in a pretty ho-hum manner.

The Floyd County Sheriff’s Department, Prestonsburg KY summed up the event on their Facebook page.

This little fellow was captured tonight inside a store after store employees called and reported it being inside.  Deputies along with troopers and Martin Police were able to safely capture this bobcat and remove him from the store. He was released without injury.

The wildcat was found in a deodorant aisle of the store (cats are so vain) and returned to the wild without any injury. Definitely not the worst fate a testy shopper has ever suffered.

The Bobcat isn’t Invited Back

No word on how Dollar General is going beef up its bobcat security — they’ve got a COVID pandemic protocol it seems high time they start making contingency plans for more bobcats. Just because everyone in the states reveres the Kentucky Wildcats basketball team doesn’t mean that these animals should be allowed to wander in and out of public places as they please. Do they? Is this fake news? Misinformation? It doesn’t matter. I need to know KSP Troopers are on speed dial to handle bobcat emergencies when I’m in Kentucky, now.

Which party is harder on bobcats? Republicans? Democrats? These are things I need to know now.

Watch: The Gruesome Tale of “The Most Haunted House in New Orleans”