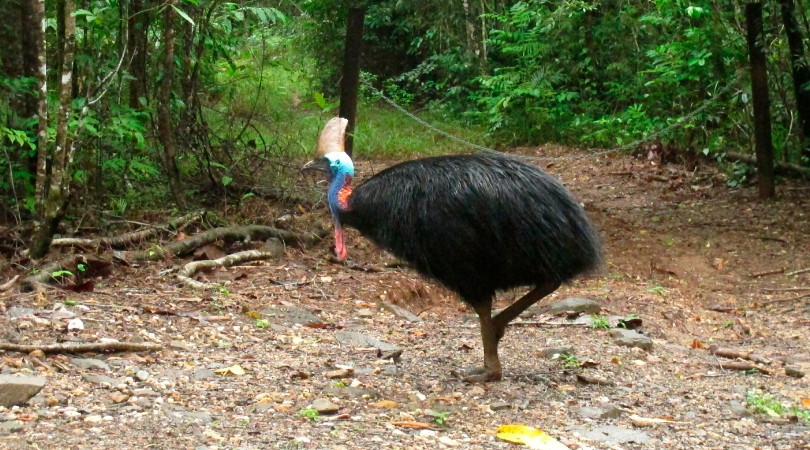 A 75-year-old Florida man was attacked and killed by a large exotic flightless bird, after falling down on his farm. According to authorities, the bird was a Cassowary, an emu-like creature that is often described as the “world’s most dangerous bird.” Marvin Hajos, who is the bird’s owner, was believed to be fatally attacked by the flightless bird, using his “dagger-like” long claws as a defense mechanism. The man was rushed to the hospital for trauma care but died upon arrival.

According to authorities, Hajos was breeding Cassowaries. Cassowaries are native to New Guinea and Australia and are considered the most dangerous bird. According to the San Diego Zoo, there are three species of Cassowary: the Northern, the Southern, and Dwarf. Authorities have not released what type of Cassowary attacked Hajos, but the bird is currently secured on private property and will be kept there until investigations are concluded.

This little chick is staying behind dad as he keeps an eye on me. So amazing to see this guy in @kurandavillage at @kuranda_rainforest_journeys . Happy I had a zoom lens though, don't like to get too close! . . . . . . . . #Cassowary #kuranda #ExploreTNQ #thisisqueensland #seeAustralia #natgeotravel #natgeoau #discoverychannel #australiangeographic #lonelyplanet #phlipvids #travel #queensland #Australia #travelawesome #welivetoexplore #BeautifulDestinations #cassowaries

Cassowaries usually stand at 6 feet tall and weigh up to 130 pounds. They are known for their black body feathers and bright blue heads and necks. How exactly are these birds dangerous? The birds have 4-inch dagger-like claws on each foot that can “slice open any predator or potential threat with a single swift kick.” Ouch.

It’s powerful legs help the Cassowary run up to 31 miles per hour, and can jump nearly 7 feet in the air making it easy for them to fend off threats or escape danger. Despite them being dubbed as the worlds most dangerous bird, Cassowaries are sought out by collectors of exotic birds. Owners need a mandatory permit from the Florida Fish and Wildlife Conservation Commission to own the birds under Florida law, which requires Cassowary owners to have “substantial experience” and meet the specific cage requirements.

The commission lists the Cassowary as a type of wildlife that can pose a danger to people who come in contact with it.