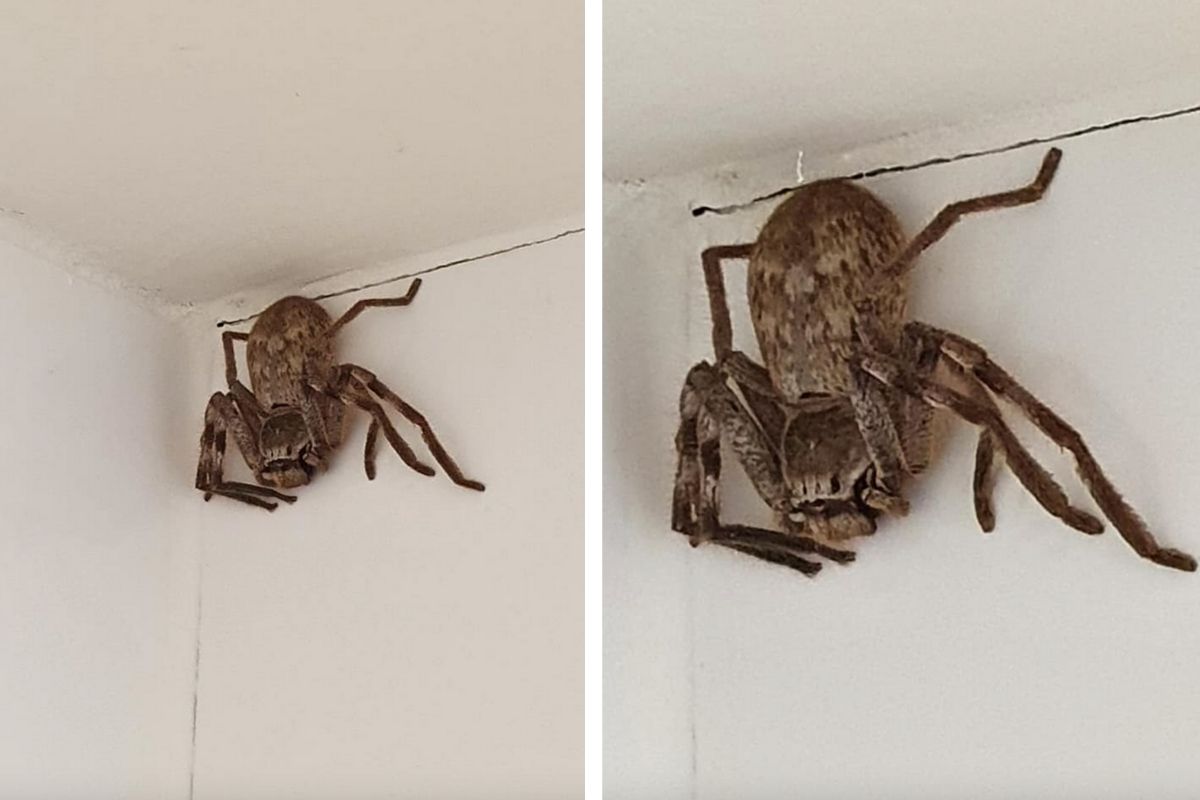 An Australian woman had quite the scare when she discovered a massive arachnid in the corner of her bathroom ceiling. Cathy Cox of Perth, Australia, turned to Facebook to figure out what to do next, after discovering a huge female huntsman spider hanging out in her shower.

Cox took to social media to consult a spider identification group, something she has done before. She asked, “I have what I believe to be a beautiful gravid Huntsman in my shower. She is out of harm’s way but should I relocate her? FYI heart racing at the thought of the latter..”

However, the responses to her Facebook post of the female arachnid were more concerned about her pictures. Cox’s pictures were close-ups of the spider, making it look alarmingly bigger than it actually is. One user said, “It looks like it’s the size of a basketball. I would not touch. He has claimed your shower. You can use the hose to wash now,” and another joked, “I really appreciate that you said she’s about 4 1/2 cm body length, but I was wondering if you could kindly put a tape measure around her belly to measure that too for our edification.?”

Most of the comments petitioned to move the spider, while also empathetically sharing their stories of finding a huntsman spider in the worst places. They also recommended that she move the spider as quickly as possible before the steam from her shower loosened the spider’s grip on the wall, causing her to fall on whoever would be taking a shower. Another comment had read, “I would relocate, I’m petrified of spiders but i have a soft spot for huntsmen, i just love how beautiful and big they can get, its amazing, currently have a huntsmen in our toilet area eating all the bugs…”

Cox eventually posted a zoomed-out pic of the spider to accurately size the creature, but it still looks terrifying. Personally, it’s the legs that scare the hell out of me. Those limbs are just way too long, both zoomed in and out of the picture. But the close-up pics? Every aspect of those pictures are incredibly terrifying.

The Actual Size of the Huntsman Spider

The Daily Mail reported that the banded huntsman is one of the largest in Australia. According to the Australian Museum, they do have large fangs that could give a painful bite, but they are not dangerously venomous. They’re also found in crevices on rock walls, in logs, under loose bark on trees and on the ground, and on foliage. All I know is that I definitely don’t want to stumble upon these guys, no matter how adorably timid they might seem.

Watch: Chris Cuomo Faces Backlash for Saying He’s ‘Black on the Inside’