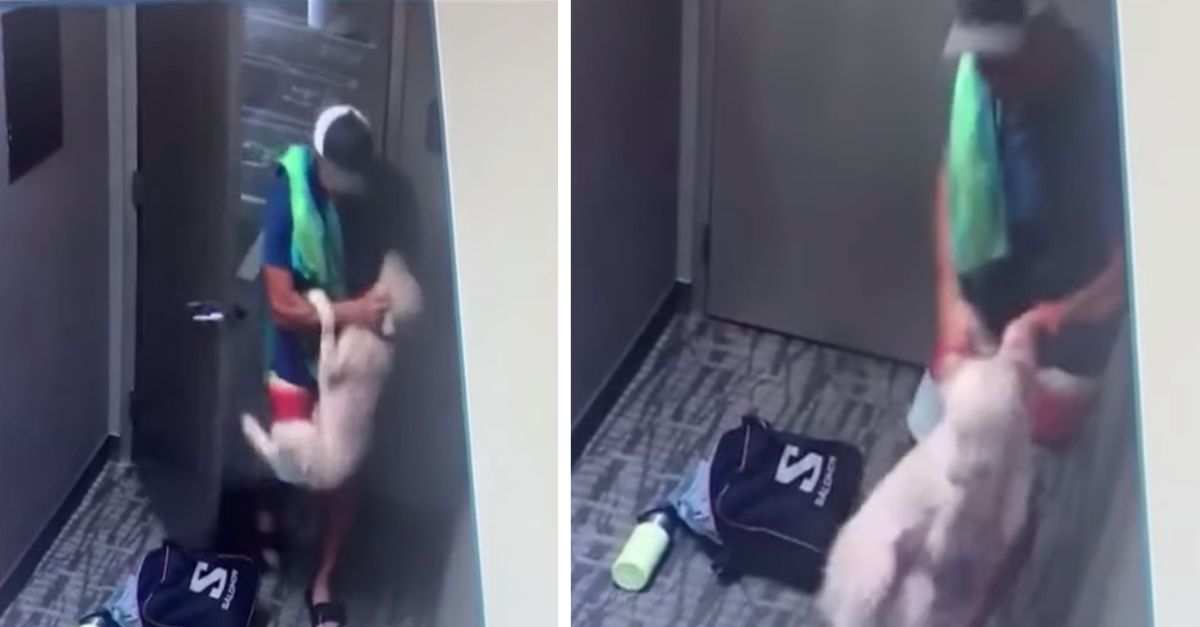 The CEO of a California environmental consulting firm was caught on surveillance video abusing his 4-month-old puppy, Bici. According to authorities, the man is identified as CEO Jeffrey Previte, and the incident took place on August 22nd at the Seychelle Condominiums building in Santa Monica. In the video, the CEO can be seen yanking the puppy off the ground by its neck and then slapping him. A concierge filed a report with the building management (compliance management) after he heard the dog screaming.

The security camera video begins with the man finding something on the ground near the dog, and then angrily picking up the dog by the right side of his head with his left fist. He then begins slapping him while shaking it around. As he opens the door, he yanks the animal some more as the door closes behind them. A minute later the man emerged behind the door carrying the poor dog with his right hand clenched around his throat as the dog cries. He then repositions his hand to carry the dog by the collar and slapping the dog, before setting it down and carrying it off-camera.

Previte stated that he did nothing wrong, claiming that after the concierge called him telling him about what he did, he had allegedly tried to ask for money from him in return of not reporting the incident to animal control. The Los Angeles man stated, ?There?s nothing illegal about what I did. The building manager took it very seriously. I find it very unfortunate that we are even talking about this.?

Despite the Los Angeles CEO’s comments the company that he works for, EBI Consulting has already pulled his profile from its leadership page, and the Santa Monica Police Department took swift action the next day, stating that the case is under investigation. Through a tweet, the department also noted the Animal Services Unit is now investigating the incident for a possible violation of penal code 597(a). Penal Code 597(a) is an animal abuse law citing anyone who maliciously and intentionally means, tortures, manipulates, or hurts any living animal.

LA CEO #Jeffrey Previte is a coward, POS degenerate asshole. He was caught on security camera mercilessly beating his four-month-old dog. Insecure twatsticks like Jeffrey will beat women & children cause it makes him feel like a tough guy. Fuck You Jeffrey https://t.co/OUO1XAwhKQ

Other subsections of the law mentioned include inflicting needless suffering, unnecessary cruelty, and any kind of abuse against an animal. The information was also submitted to the district attorney for consideration of a charge of malicious Mischief against an animal/ animal cruelty.

Previte?s brother, Nolan, who is co-CEO of EBI Consulting defended his brother’s action in the shocking video, stating that his actions were done in order to discipline the four-month-old-dog for peeing on the rug. The joint CEO insisted that his brother is very kind-hearted and deeply cares for the dog he was caught on video physically beating. After claiming to be a victim of extortion, Previte issued an apology letter to his colleagues and Friends. The letter read,

Felony charges are in order!

No-one with a heart should give this man one cent of business; when he’s not tormenting his puppy, he kills other animals for fun. https://t.co/k23vsNprR8

?I want everyone to know that I truly regret my actions on August 22, 2020. Words can?t fully describe how sorry I am for what happened. I lost my temper and took unreasonable and unjustifiable action in attempting to discipline my dog Bici. As I have said, words are not enough here. Bici is no longer living with me and is with another loving family. I have also stepped away from my job and am enrolling in anger management training.?

EBI Consulting Deactivated their social media pages, and have removed any mention of Jeff Previte from its website. Despite apologizing and efficiently surrendering the four-month-old-puppy to a more loving and deserving home, the dog beater could still face criminal charges.