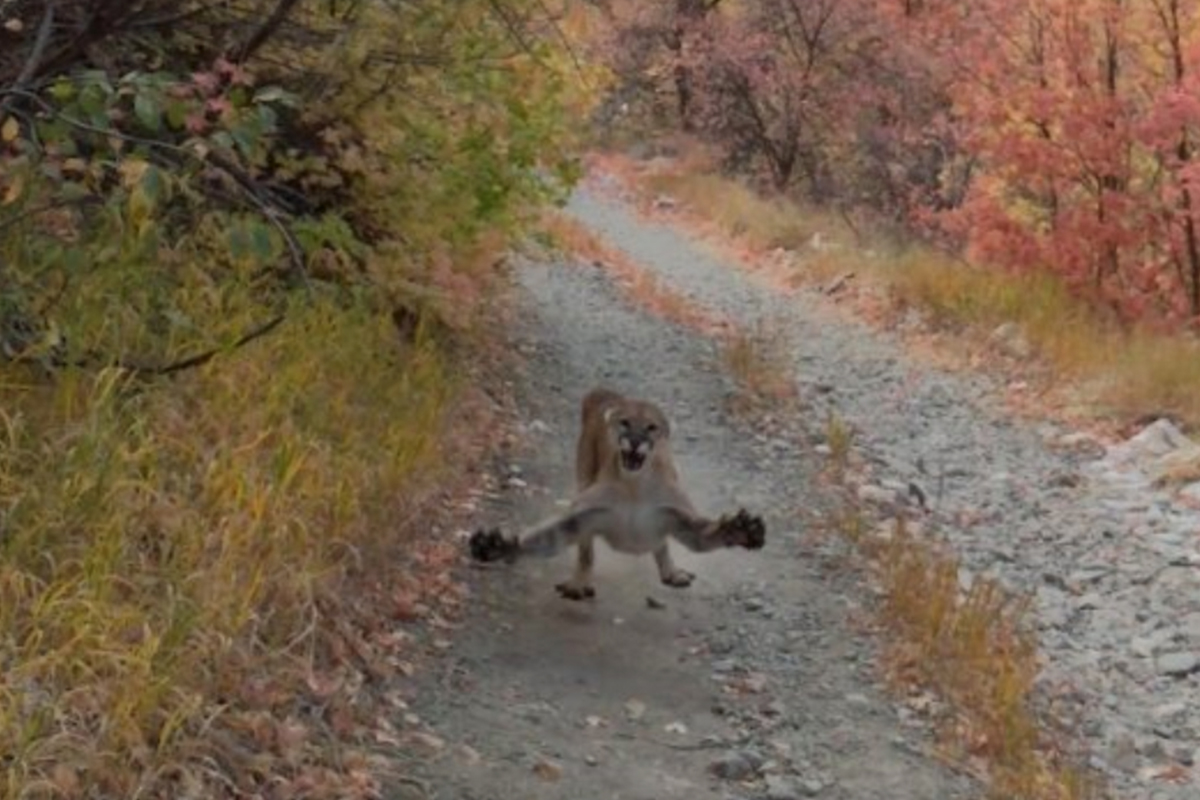 A Utah jogger had a terrifying and nearly deadly encounter with a mountain lion that seemingly would not end while he was out for a run in Slate Canyon.

26-year-old Kyle Burgess of Orem, Utah was running a trail in the Utah wilderness when he noticed a pretty unfriendly looking cougar following him. Burgess said the cougar sighting included a couple of cubs and so he assumed the cat was being territorial. The female cougar, however, was not content to simply growl and watch Burgess go on his way.

The cougar — or puma or mountain lion or whatever you want to call this big cat because this particular species has like eight names — continued to follow Burgess over a long distance, threatening to pounce again and again. Multiple times the cat lunged at Burgess and it looked like a mountain lion attack was imminent. This was not a happy kitty cat.

Unsure of whether or not he was going to have to fight off a cougar attack with his bare hands or not Burgess again and again attempted to maintain eye contact with the animal, and make himself as big possible and make lots of noise. (All things that hikers are recommended to do when they come into contact with a cougar.)

He also smartly avoided turning his back and running, which is the exact last thing you want to do when faced with a cougar.

This Thing Was No House Cat

Or maybe it was, really. Your house cat would straight-up murder you if it could. Regardless, Burgess was eventually able to escape the cat’s territory without being harmed… at least physically. At the end of the video this guy sounds absolutely mentally and physically exhausted. His body thought he was on the verge of death. Adrenaline had to be absolutely coursing through his veins the entire six minutes, which felt like six life times.

Despite the fact that this video is basically a panic attack-inducing infomercial for never leaving the city — it’ll also have you screaming, “PICK UP A ROCK!” — it is actually a great illustration of what to do if you encounter a cougar.

These cats are basically everywhere in North America and the United States. From Oregon to Colorado (where it’s definitely a “mountain lion”) to Florida (where it’s a puma… or a panther, like Miami’s hockey team?). And they aren’t only found in remote areas. Joggers in California have been attacked by mountain lions numerous times, to say nothing of pets. So take heed of this video. It’ll shows you how to stop a big cat. And also that you should stay indoors.