Deadly Crocodile Attack on Swimmer Caught on Video in Mexico 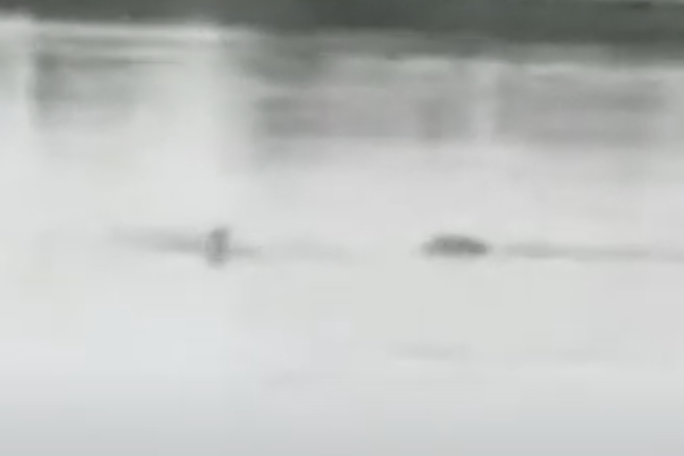 A video from Tampico, Tamaulipas in Mexico shows a man being attacked by a saltwater crocodile while swimming across a body of water. After the croc attacks the man and pulls him underwater he is not seen again.

The video of the attack was posted to YouTube on October 18th, 2020 to the channel “Lo que pasa en Monterrey.” It shows a man, purportedly in his 50s or 60s, attempting to swim across the Laguna del Carpintero near Tampico, Mexico, which sits on the gulf coast of Mexico, almost directly across the gulf from the Yucatan Peninsula and Cancun. According to local authorities, the man ignored several warning signs telling people not to swim in the water because of the numerous crocodiles populating the area.

As the man swims, a 10-foot crocodile is seen chugging towards him. Finally, as the croc nears, it goes under and strikes. The last thing seen is the predator’s tail whipping above the water. Onlookers are stunned and horrified at what is clearly about to unfold, though they have no way to warn the man. Their commentary, in Spanish, can be heard as the video of the attack is being recorded. A scream is also heard somewhere in the background.

Man: Take a picture, look how he’s grabbing him.

Woman: Fabiola tell the cops that the crocodile already got him and he’s underwater. Poor guy.

According to local news outlets, the man was killed by the crocodile. An arm was missing from his body when firefighters recovered it. He also suffered neck and chest wounds.

Like the alligator in Florida, saltwater crocodile sightings and encounters in Mexican states like Oaxaca and Tamaulipas are extremely common. Attacks are not a daily occurrence by any means but if a person intrudes into crocodile territory they should expect things to go badly and no lifeguard to swoop in and save them. This was far from the first time a saltwater crocodile has attacked a human in Mexico. In 2017 an American tourist was left in serious condition after he wandered into the Nichupte Lagoon in Cancun to take a pee and a croc ripped off his arm. The hotel staff was able to locate the man and take him to the hospital thanks to his screams.

In July of 2020, a 6-year-old boy was attacked by crocodiles in Ixtapa, Guerrero near El Palmar beach. The boy suffered serious injuries but was rescued before the croc could drown him.

The American crocodile’s habitat ranges from northern South America, Central America, up through Cuba, southern Florida, and Mexico, including the Pacific coast of Mexico.