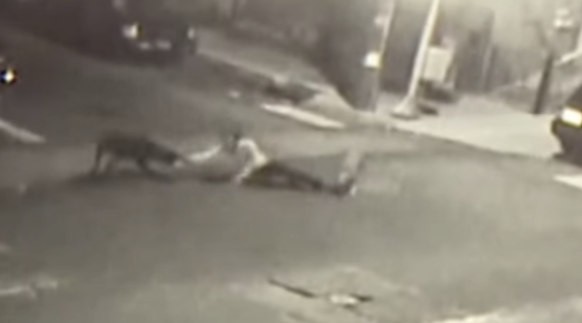 A pit bull and a bull mastiff, both about a hundred pounds in weight each, were shot by police as they mauled a random 57-year-old man they attacked on the streets of Philadelphia at 4:40 a.m. Monday morning. The bullmastiff was killed at the scene but the pit bull, which was also shot, escaped and has yet to be found.

The dog attack victim’s injuries were so severe that officers reported they could see bone through his multiple bite wounds. Responding police applied tunicates to the man before he was taken to the hospital in serious condition.

BREAKING, DOG ATTACK: A 50 YO man was attacked by 2 dogs, a pit bull & a bullmastiff. Several phone calls of a man screaming. Officers arrive to shoot the bullmastiff dead. The man had been bit down to his bone on his arms & legs. He’s in critical condition. pic.twitter.com/7xPkDKzwSh

At one point a different person tried to help the man being attacked by beating the dogs with a cane but one of the dogs chased him off. In the video the victim can be seen being dragged and tossed around with ease by the dogs.

When police finally arrived they attempted to shoo the dogs away before finally realizing (as the dogs were ripping through the man with reckless abandon) that they were going to have to take more drastic measures. The gunfire scared the pit bull off but the bull mastiff was so focused on ripping the man into ribbons that it didn’t pay the bullets any mind at first. The dog just kept right on mauling. The officers kept firing until the bull mastiff finally went down.

No one has any idea where the dogs came from or why they attacked the man, so be on the look out North Philadelphia! There is still at least one dog out there hunting human beings. This latest attack comes just a few days after a 9-year-old girl was killed by three pit bulls that escaped from her neighbors yard in Detroit.