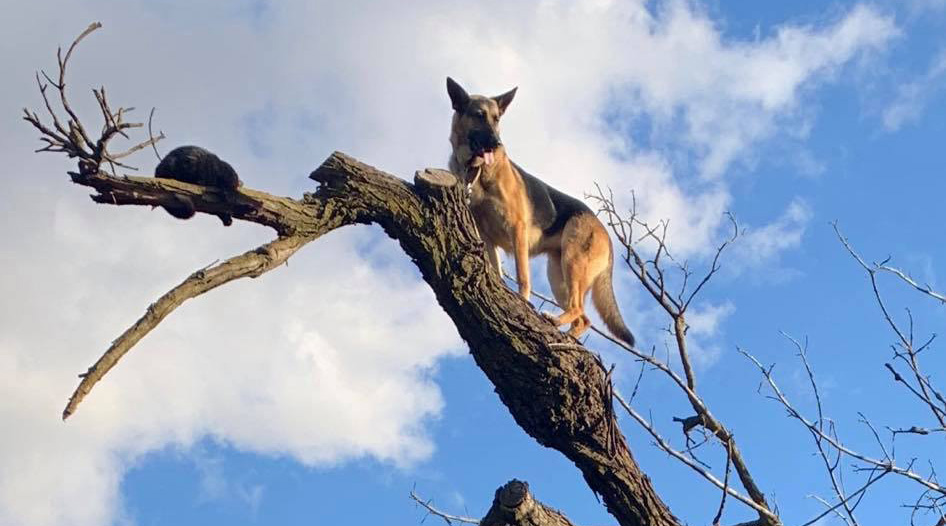 A German Shepherd that lives just south of Sacramento, California was in such hot pursuit of a cat that he didn’t realize he ran himself straight up to the top of a tree. Once up there, the dog, in wildly unfamiliar territory for his species, didn’t have any idea how to get down. (Plus there was still a cat up there to catch.)

Thankfully for the dog in question (and the cat it was sort of trying to murder), the Lathrop Manteca Fire Department showed up for the extremely atypical “cat in a tree” call.

Thankfully both the cat and the dog were rescued with expertise and ease. They’re both doing well according to the fire department, who posted an update to their Facebook.

Update: We have received word that both cat and dog are doing well! While we don?t typically update or respond to comments, after seeing so much interest for the cats well being we felt we had a responsibility to share the news. Thank you again for everyone?s interest, and from all of us at the #LMFD we hope you have a special holiday season.

It should be noted that this dog’s balance is incredible. That isn’t that big of a branch it’s on and, also, God knows how long it was up there. My dogs fall off the sofa with regularity. And they’re the size of cats. This German Shepherd is huge and is just hanging out on that branch like it’s nothing. Clearly it’s so focused on getting to that sweet, sweet, cat meat that its adrenaline and hyper-focused animal instincts have turned it into a dangerously graceful predator.

Also, that poor cat. Thinking that climbing the tree was going to be the end of its terrifying ordeal only to look back and see that thing’s monster teeth chomping right behind it. You’re going to need a new escape plan, kitty.

Editors Note: This article was originally published on December 19, 2019.