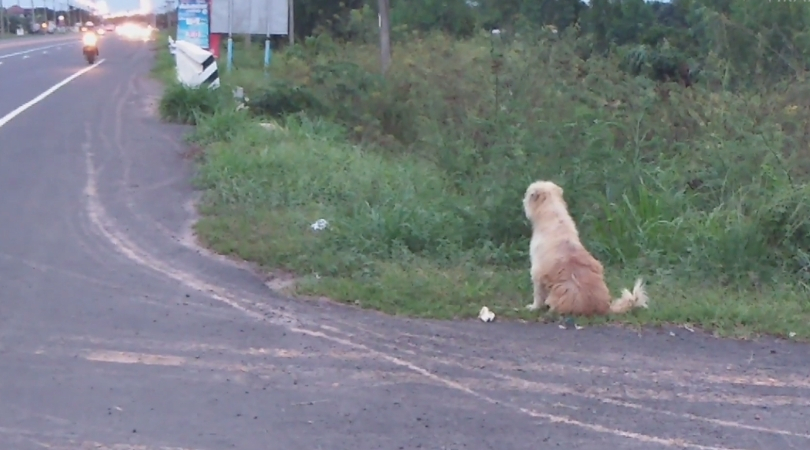 Sit down and grab a beer folks, it’s storytime. Back in September, a man named Anuchit Uncharoen was riding his motorcycle down a highway he takes every day. The man, who is from Thailand, spotted a sad-looking pup sitting on the side of the road. He didn’t think anything of it at first but noticed the dog seemed to be anxiously waiting for someone or something.

Later that day, the man decided to ride by the exact same highway and saw that the lonely pup was still sitting there. After stopping next to him to see if he was okay, he learned about the animal’s history. That’s when he met Saowaluck Pinnuvech.

According to Pinnuvech, back in 2016, she kept finding the dog at the same exact corner every day. So, she decided to take the stray dog to the vet, named him Leo, and adopted it. Unfortunately, Leo ran off a couple of days later. While looking for him, she found the dog in the same corner along the highway and knew that he was definitely waiting for something. Granting his wishes to wait there, she decided to let him stay but would bring him water and food every day at that exact same spot. Although the woman loved Leo, she understood that he wasn’t ready for a new owner.

After the motorcyclist shared the touching story last month, the real owner of the pup came forward. An elderly woman named Noi Sittisarn said back in 2015, Leo had jumped out of her pickup truck. Both she and her husband looked everywhere, but couldn’t find him.

https://t.co/vMTOYiwgEz This made me cry-just one example of how loyal dogs are. #AnimalRights #animallover

When Noi arrived at the corner to finally reunite with Leo, after more than 4 years, he ran over to her and he was quickly greeted with pets and rubs. Leo, unfortunately, refused to go home with her. That’s when Saowaluck decided to step in and begged Noi to keep the dog herself since she had become so attached to him and had already tried to adopt him.

So, Noi agreed, and Leo has been with Saowaluck ever since, no longer sad about his former owner abandoning him, and no longer waiting. Talk about one loyal dog! Could it be that little Leo just wanted to say goodbye to his first owner? Who knows, but I will say this, dogs are some of the most loyal pets out there. A man’s best friend, that’s for sure.

Can someone make this a TV show?

This article was originally published on October 30, 2019.

Watch: The Sexiest Vet Is Also Really Good with Animals