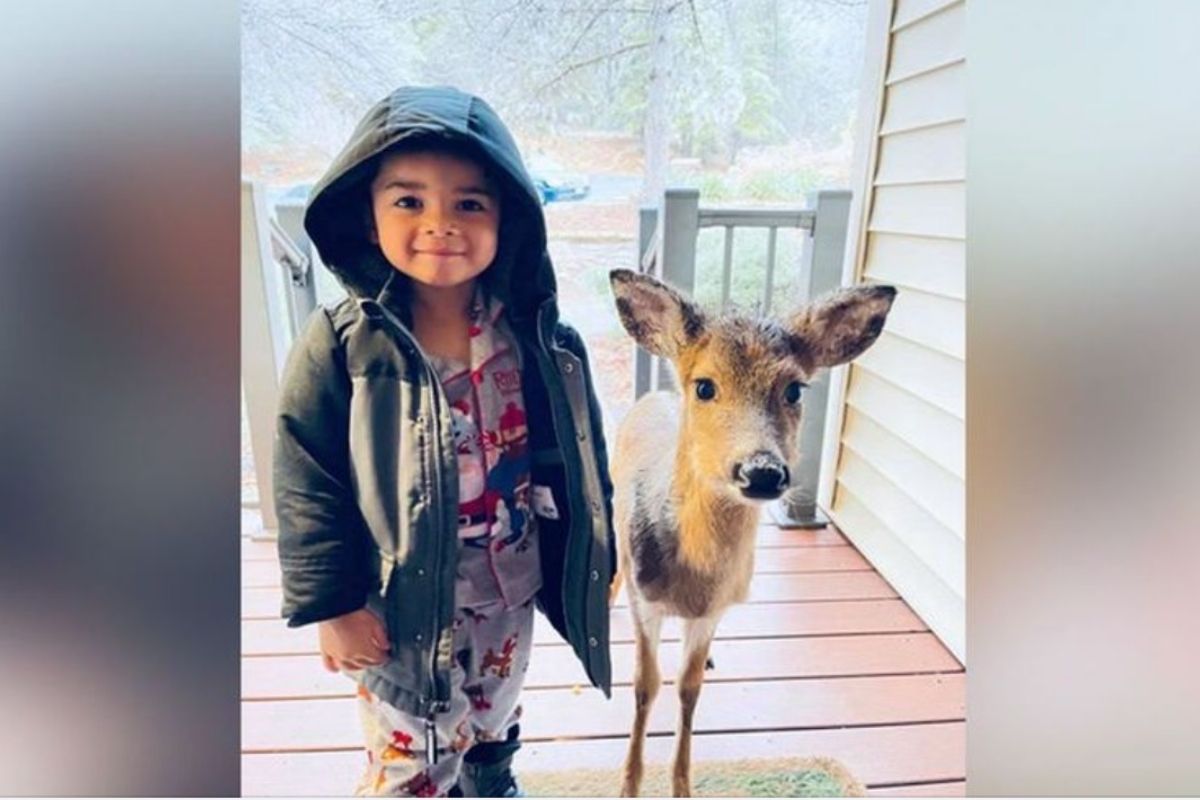 Via WRBL
Via WRBL

Looks like this 4-year-old brought home a very deer friend to meet his parents. Ha, see what I did there? Okay okay, I’ll stop, But this is nothing short of adorable. Turns out a 4-year-old from Virginia shocked his mother, Stephanie Brown, after she opened the front porch one morning to see her son with his new friend. In shock and of course, in awe, the mother decided to capture the sweet moment, because this baby deer is clearly happy to be there.

Brown stated, “I couldn’t even tell you, I was in shock. I was like, ‘no way. My mind is playing games with me.’” Apparently, her son Dominic, who I’ll refer to as Robinhood, became an animal whisperer overnight. What’s even more hilarious about this whole situation is that he was actually wearing his Rudolph the Red-Nosed Reindeer pajamas that day. I’m thinking this probably attracted the small creature as he saw his pajamas and said “hey that’s me. I look adorable.”

Well if this isn't absolutely adorable…

"After taking pictures, [Mom] asked Dominic to lead the deer back to the woods." ❤️https://t.co/br3eb8thm6

The 4-year-old’s family was getting ready to return home to Virginia’s Northern Neck after a short getaway weekend near Shenandoah National Park when Dominic made the very fun discovery in the woods. Brown stated, “On one of my trips, I remember I went back into the kitchen, and I was getting something out of the refrigerator, and I peep my head around because I heard him kind of wiping his little boots on the mat. I was like ‘OK, he’s getting ready to come in.’ So I turn my head and there it is. It’s like a little baby deer and him. Like, it wasn’t anything strange for him. It was really weird.”

Brown decided to post a photo on her Facebook page on Tuesday morning, which has now garnished more than 10,000 post shares. But, don’t worry the mother did not take her eyes off her child that as she was taking the picture. The cell phone was in her pocket as she carefully snapped the photo for everyone to see. Apparently, without hesitation, Dominic picked the name Flash, which yes pertains to the superhero, and it is an unintended metaphor of the pair’s brief encounter.

The mother stated that Dominic didn’t act as though anything was out of the ordinary by bringing a deer home. When she asked her son where she found it, he said that the deer followed him and he going to give it cereal. The dynamic duo acted like they were best friends, but unfortunately, Dominic didn’t get a new pet. After taking the pictures, both Brown and Dominic led the deer back into the woods so he could go back home.

What a sweet story!