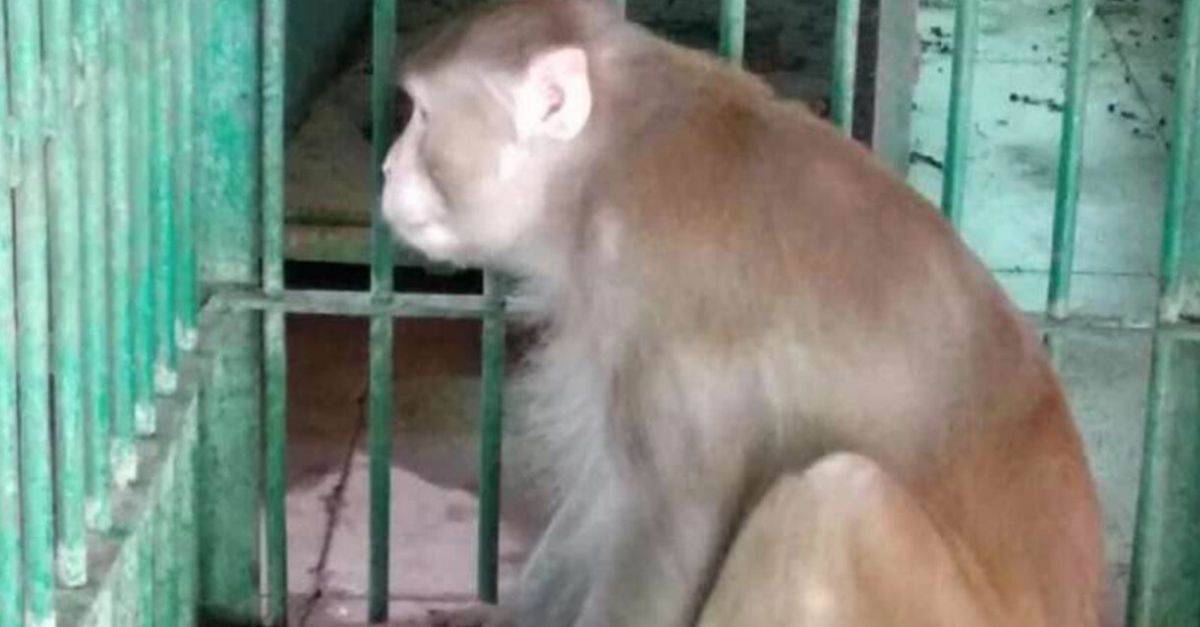 Yikes, this monkey literally went wild. Although monkeys are no more than 2 ft tall, they’re pretty much known for being four times stronger than humans. Which is how one drunken monkey, named Kalua, was able to tear through 250 people, killing one, while on a rampage in India. The zookeepers at Kanpur Zoological Park who are charged with assimilating the primate for the last 3 years or so have deemed the animal too dangerous to live among his kind.

Yes, so this poor monkey, and terrifying of course, has been sentenced to solitary confinement for the rest of his life. According to local authorities, the alcoholic monkey belonged to an? occultist? in Mirzapur, Uttar Pradesh, who authorities believe he supplied the monkey with a regular diet of hard liquor and monkey meat. After the owner was found dead, they believe the neglected monkey progressed on the street and began roaming the neighborhood attacking people.

Authorities stated the drunk monkey practically attacked the faces of children and women. Kalua had eluded animal trappers in the forest of Mirzapur for quite some time before finally being captured. The monkey, who is now six years old, was brought to the Kanpur Zoo where he remained hostile towards the theme of zookeepers as well as other monkeys.

According to zoo doctor Mohd Nasir, the zoo, ?kept him in isolation for some months and then shifted him to a separate cage. There has been no change in his behavior and he remains as aggressive as he was. It has been three years since he was brought here, but now it has been decided that he will remain in captivity all his life.?

So, like an old man who refuses to listen to two experts, a zoologist stated that Kalua was addicted to alcohol, and also refused to eat vegetables and other typical monkeys fare. They also believe that his anger may have been a result of the cannibalistic regimen the occultist had prescribed to his animal.

Seems to me like monkeys are trying to take over during this pandemic. Just last month, monkeys in Meerut, near Delhi, stormed the campus of a Medical College seating several COVID-19 positive blood samples which caused outbreak panic in their community. Although samples were lost, local officials at the university did assure the public that there is no evidence that monkeys have transmitted coronavirus to humans at this point. But, scientists do know that they have the ability to develop ? a natural immunity? after being exposed to the virus, a hint that means the same could be said of humans.

Watch: Scientists Have Reportedly Created a Human-Monkey Hybrid in China