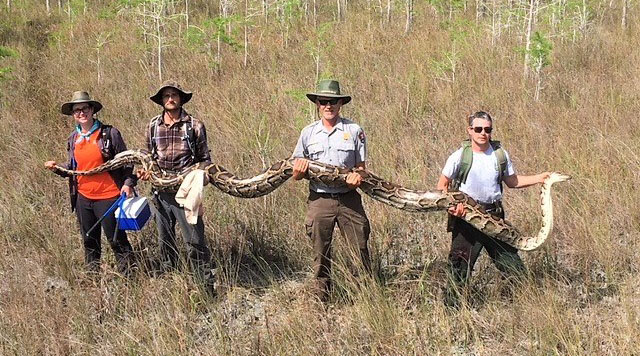 What do you do when you find a 17-foot long, 140-pound python with over 70 eggs inside it, ready to hatch, in the wild? My first instinct would be light a running wood chipper on fire and then toss it into that. And then take whatever comes out the other end and run it through again, just to be safe.

It’s unclear if this is how officials at Big Cypress National Preserve in Florida handle the invasive monsters but it should be, especially in light of their most recent find. A python that is literally big enough to kill a person. A smarter person may want to kill the python but keep it in order to study the beast. I’m more of an incinerate first, ask questions never kind of guy though. Just look at this thing.

Fortunately for the state of Florida and humanity at large, the Big Cypress National Preserve — along with every other agency even remotely related to animals in the state — is fighting hard against the python invasion. They make it their mission to remove as many of these things from the park as they can, before the killing machines eat every single type of wildlife native to Florida, from swamp rabbits to Hooters regulars.

At this point there are so many pythons, and the slithery bastards are so hard to find, that it might just be a better solution to Noah’s Ark all the native Florida species, nuke the rest of the state, then move back in. What else do you do here? Genetically engineer Pit Bull-sized mongooses and release them into the Florida wild? Actually… maybe.

And until the state is able to either genetically engineer said mongooses or pass a law that allows it to force incarcerated violent felons to hunt pythons we’re going to see more stories like this.

This story was originally published April 8, 2019.