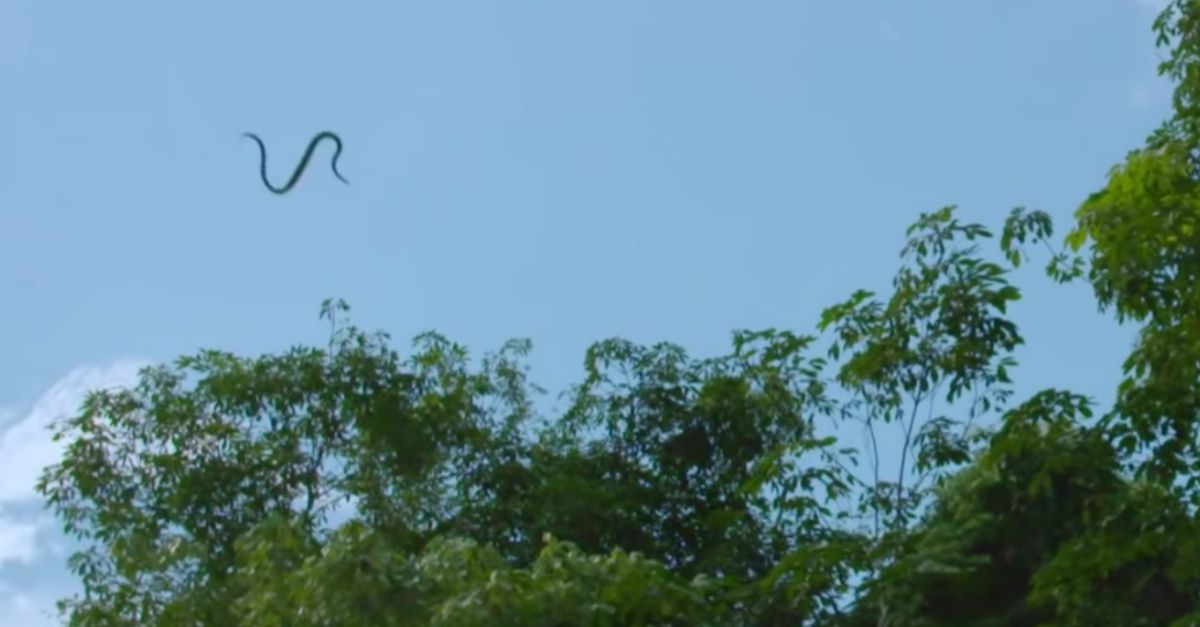 I hear the words “flying snake,” and I immediately, fearfully look up towards the sky as if a wiggling strand of life was zooming towards me. Did I miss something and snakes suddenly got wings?! I’m not too keen on the idea, and I’m already always cautious at the sight of a snake slithering on the ground. Martin Luther King Jr. once said, “If you can’t fly, then run. If you can’t run, then walk. If you can’t walk, then crawl, but whatever you do you have to keep moving forward.” Can someone please tell me when and how snakes skipped the walking stage?!

Before I end up digressing, the correct way to describe how “snakes fly” is actually stating that “snakes glide,” as Isaac Yeaton had informed CNN about a study that he was leading to understanding how these slithering, limbless animals do so. Okay, so if they already can’t walk, how the heck do they fly? They’re not exactly flying squirrels, but all gliders the same, I guess.

Yeaton, along with a team of scientists and researchers at Virginia Tech, was studying the paradise tree snake, scientific name Chrysopelea paradisi, experimenting with live snakes indoors. He explained that his team understood the basics of undulation, which is the term that describes how such snakes move across the ground, because of Jake Socha, who’s been studying snakes for a couple of decades.

Realizing that these flying snakes make the same undulating motion as they “fly” through the air, the team considered that undulation is a snake’s natural base motor pattern, developed in their evolution over time. Nevertheless, Yeaton and his team came to understand that this same aerodynamics of this “undulating motion” is actually the very reason why these flying snakes can maintain their glide, covering a longer distance without falling.

The team’s next task for more new research is observing how the snakes are “gliding” across tree branches outdoors. Yeaton explained to CNN that there’s so much to explore surrounding snakes, but learning more about them might ease the fear that initially comes with any experience with them (hence, my immediate reaction to looking up towards the sky!).

FLYING SNAKES: The paradise tree snake isn’t new, but researchers have figured out how they can remain airborne for so long. https://t.co/TFCuDSqN2o

So where are these gliding snakes, and are they venomous? The paradise tree snake lives in South and Southeast Asia and is mildly venomous. Their venom is only dangerous to small prey, but they’re apparently considered dangerous monsters in the game “Dungeons and Dragons” (D&D 5th edition, for all the gamers out there). So don’t get them confused with winged serpents or anything.

All the research was published in the journal Nature Physics. Maybe Isaac Yeaton was right. I’m a little less scared now knowing more information about these flying snakes. Just a little.