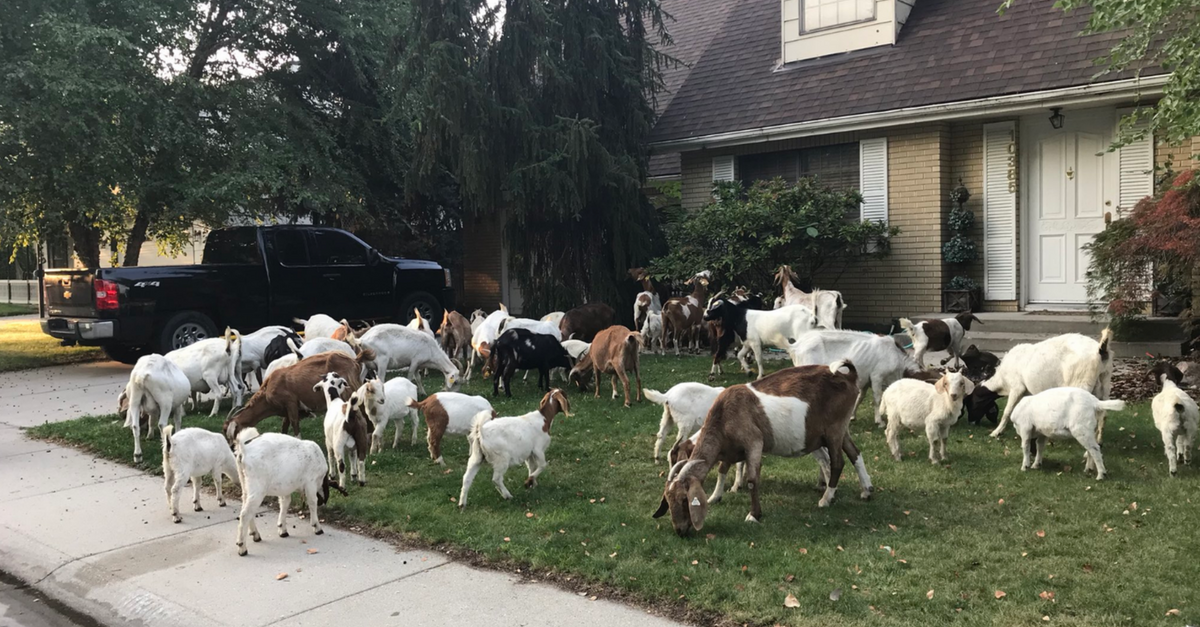 A herd of about 100 goats descended on a neighborhood in Boise, Idaho this morning, and no one was really sure where they came from at first. The residents of the neighborhood just woke up, went outside, and goats were eating every piece of greenery in sight, moving from lawn to lawn like adorable locusts. It was as if an incredibly tame sequel to Birds were unfolding, where the only victims were innocent lawns and shrubbery.

#Breaking – About 100 goats are on the loose right now in a #Boise neighborhood. They are going house to house eating everything in sight. Nobody has a clue where they came from…updates to follow pic.twitter.com/K0ghUwQEfk

Party is over “kids”! Loose goats have been cornered and loaded back onto a truck owned by “We Rent Goats” pic.twitter.com/qWHrb7X7n6

The “new kids on the block” are now off the block! The final goats are now reluctantly going home. What a morning pic.twitter.com/Quyca6owdy

Eventually, Boise Animal Control figured out that the goats were from a company called We Rent Goats. The business, true to its name, rents out goats to clear weeds and help with fire suppression on private land and public property. The goats were in the area grazing when they escaped their confines and decided to live it up in the suburbs.

Animal Control initially responded with a lone truck but officials quickly realized they were in over their heads. This was a full-on goat assault. Fortunately, they decided to call for more trucks instead of grabbing shotguns from the trunk and shooting their way out.

Residents of the neighborhood were amused by the whole thing and went to take pictures with their kids, though I’m still rooting to see a lawn care and/or gardening freak to who lives in the neighborhood give a furious interview to the local news before the day is out.

“It… it was a massacre. THE MONSTERS! Someone is going to pay for this… with their lives”

The goats were eventually rounded up without incident by We Rent Goats and many a Boise lawn and garden is once again safe after a morning of terror for the neighborhood’s green spaces.