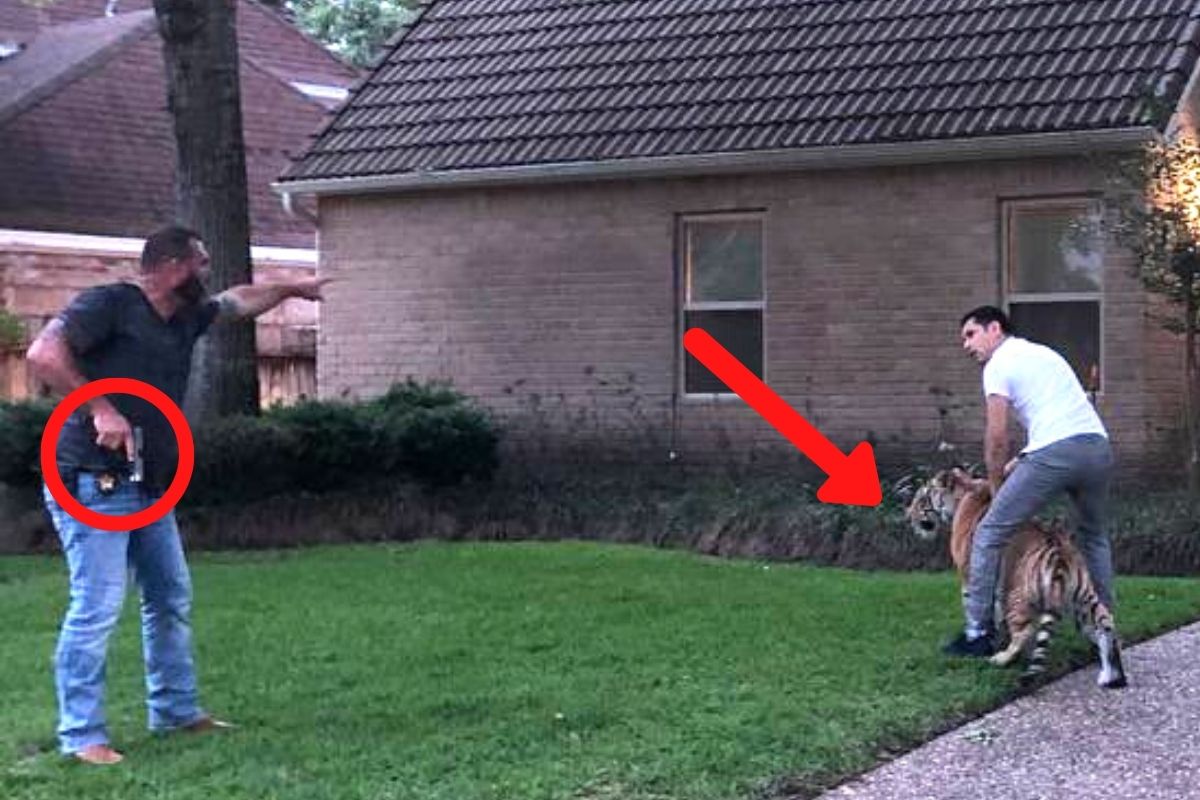 Yesterday in Houston, Texas, a Bengal tiger roamed loose within city limits. It was quite the Mother’s Day shock when residents of the West Houston neighborhood looked outside to see the big cat staking out their quiet streets. Even chilling in their front yards! Footage of the bizarre, wild run-in is now trending as questions remain regarding how the hell this tiger ended up in the Lone Star State.

“Fuck You and Your F**cking Tiger”

On Sunday night, a large Bengal tiger was spotted wandering a residential Houston neighborhood. Naturally, bystanders began to record videos that show the tiger on Ivy Wall Drive around 8 p.m. According to local news reports by KHOU 11, one witness pulled out a weapon and pointed it at the wild animal, threatening another man to take it away — implying that the tiger belonged to this person.

The video from Twitter user @robwormald , linked above, has gone viral on social media. Listen closely and you can hear the man, who is brandishing what looks like a gun, warn “Get the f**k back inside. F**k you and your f**king tiger.” The supposed owner — who touches the tiger directly — appears to listen.

As the story grows, the man with the gun has allegedly been identified as an off-duty sheriff’s deputy. Dispatcher audio, publicized by Broadcastify, reveals moments from that initial 911 call:

“This is about a tiger. I’m on the phone with the caller, who is a sheriff’s department sergeant, and he’s holding the owner, and the owner is trying to leave.”

In more video evidence of the animal standoff, one woman watches and remarks, “There is a freaking Bengal tiger roaming in this yard and this dude needs to be careful. What the heck? Why is there a tiger?” From this higher angle, watch the tiger stretch out next to a For Sale real estate sign; it’s truly surreal.

Houston police told TMZ that cops received a call about the loose tiger around 8 PM on Sunday but by the time they showed up, the animal was gone. Witnesses told them that someone, presumably the tiger’s owner, had loaded the animal into a white Jeep Cherokee and fled the scene. Then the cops spotted the vehicle soon after, and a chase ensued — but they ended up losing the car.

The latest news, however, is that a manhunt is underway. Now HPD knows the license plate info for the car and has a physical description of the man at large… who they believe is keeping the tiger illegally.

Technically, it is always illegal to own an exotic pet in the City of Houston. But in the nearby, unincorporated Harris County, tigers can be kept as pets — if you’ve filled out the paperwork and are properly insured.

WATCH: Siegfried & Roy Tiger Handler Shares Real Cause of Mauling Was Covered Up