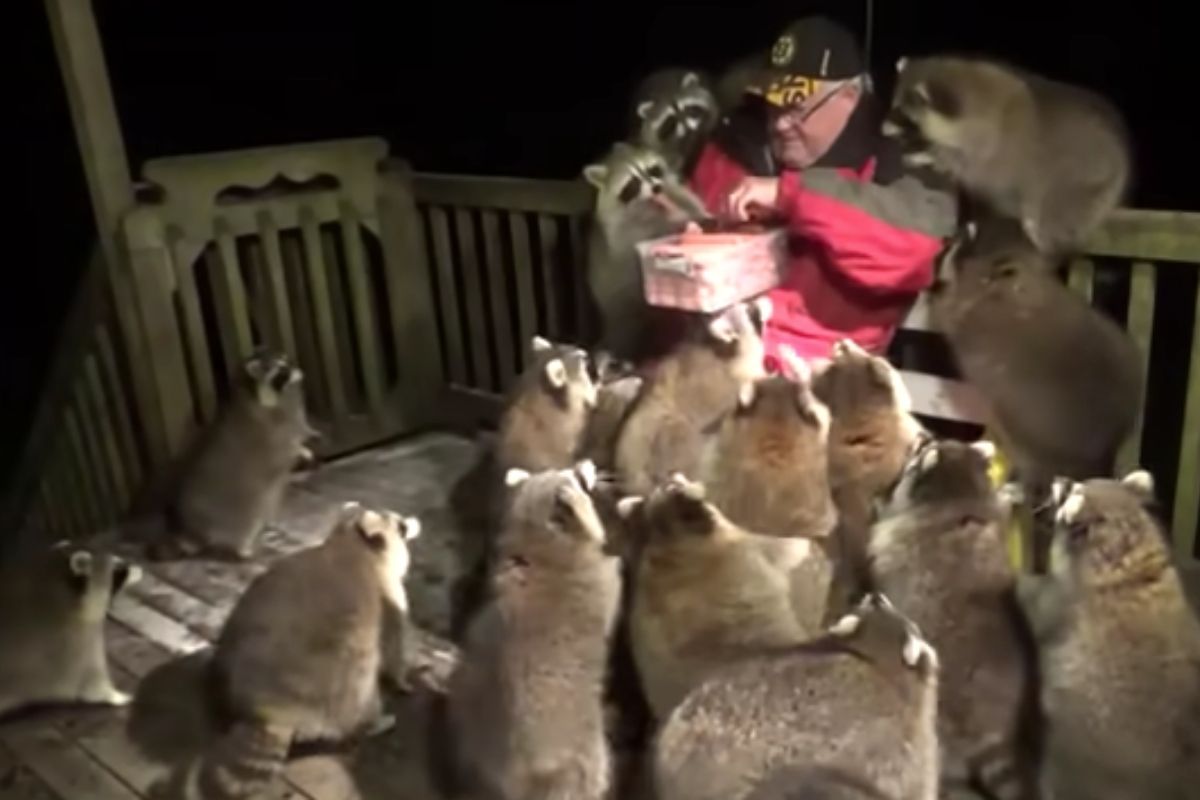 What might be a nightmare to most, is actually a wholesomely cute interaction between James Blackwood and his little animal bandit friends. Known as the “Raccoon Whisperer,” Blackwood has a steady relationship with the raccoons of his area. And although that might terrify the general public, the story behind why is sweetly adorable and might bring a few tears.

Blackwood is living out his retirement in a rural area in Pictou County, Nova Scotia, in Canada. The Canadian retired Royal Canadian Mounted Police officer (RCMP) has gained quite the following on his Youtube channel, for posting videos of him feeding raccoons all types of foods, including hot dogs, peanut butter sandwiches, and doughnuts. And it’s not just one or two raccoons. It’s a ton of them, bringing along their other furry friends.

It all started back in 1999, when his late wife Jane, rescued a raccoon that had been hit by a car near their home. She nursed it back to health and then released it back into the wild, but the little guy kept coming back, eventually with a cub and more friends. Blackwood said when Jane died, he promised he would keep up with his wife’s project, and hasn’t broken that promise in 20+ years. He said back in 2016, “She died in 2003 and the last thing she asked me was to look after the cats that we still had and the raccoons.”

And the raccoons are loyal. They keep coming and coming back, bringing more of their friends, and Blackwood has even seen a fox and a black bear interrupting his feeding one night.

Unfortunately, Nova Scotia’s government warns against feeding wildlife in fear that they may become food-dependent on people or pass illnesses. The province’s department of lands and forestry has a guide on how to interact with local wildlife that mentions,

“We are fortunate in Nova Scotia to share our environment with an abundance of wildlife. Attracting wildlife into populated and developed areas, however, has the potential to cause a host of problems for the animals and for ourselves, neighbors and pets. The best ‘care’ we can provide wildlife to ensure their health and continued existence, is to maintain quality habitat and healthy ecosystems where possible… and keep wildlife ‘wild.’”