Koko the Gorilla Mourned the Loss of Robin Williams 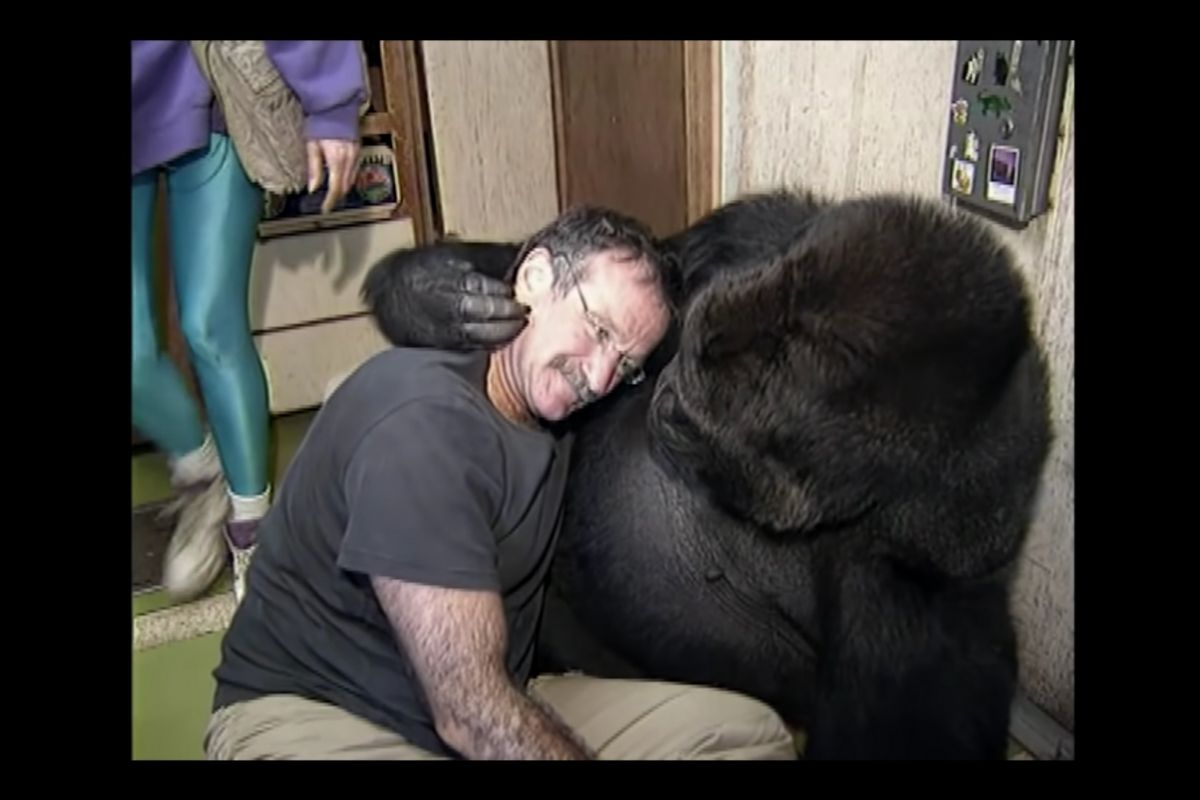 Koko the gorilla might be remembered for her sign language expertise. And Robin Williams is certainly most revered for his transformative comedic genius. But did you know the unlikely pair were also close friends? In 2001, Williams paid a first-time visit to the especially communicative great ape after Koko had experienced great loss. Bonding instantly, the famous funny man managed to cheer up the sad Koko and forge a true connection. Footage of the historic visit speaks for itself.

Born at the San Francisco Zoo, Koko the gorilla became a household name after her famous photo appeared on the cover of National Geographic in 1978. The snapshot was especially iconic because Koko took the photo herself in a mirror — but Koko would go on to become an even bigger celebrity both in the United States and abroad.

The western lowland gorilla became a household name after learning American Sign Language with Dr. Francine “Penny” Patterson as part of a Stanford University primate research project. The lessons began in 1974 when Koko was just one year old. For decades, her communication skills improved and came to be celebrated worldwide.

In 1990, Francine G.P. Patterson and Ronald H. Cohen published the paper, “Language acquisition by a lowland gorilla: Koko’s first ten years of vocabulary development,” that explored not only Koko’s aptitude for language, but how language connects us to one another. The paper lists Koko’s first 50 words, which include simple things like “more,” “toothbrush,” “candy,” “Koko,” and “swing.” In its conclusion, the paper states,

“…in many respects, gorilla acquisition and production of sign language appears to parallel that of the human child learning language, with the closest parallels to human children learning signs; however, the pace of gorilla language development has been significantly slower than that of the normal human child.”

No doubt, Koko’s ability to sign made her an especially emotional and cognizant animal. The classic nonfiction children’s book from 1985, Koko’s Kitten, follows the true story of Koko’s intense bond with a pet cat she named “All Ball.” And that was one of many stories which helped extend Koko’s legendary reputation far beyond her home in Northern California. Publications and televised segments about Koko became, for much of the public, our first glimpse into interspecies communication.

An Atlantic articled published in 2015 begins: “One of the first words that Koko used to describe herself was Queen. The gorilla was only a few years old when she made the gesture–sweeping a paw diagonally across her chest as if tracing a royal slash.” That’s the kind of confidence and intelligence which define Koko’s legacy. But the gorilla had her off-days too. Following the death of her best friend Michael (another gorilla) in 2001, Koko entered a deep depression… which eased only after meeting another unique celebrity: the one and only Robin Williams.

In the 2001 segment, which appeared in the 2016 BBC documentary Koko: the Gorilla Who Talks to People,Robin Williams narrates the “mind-altering,” “awesome” experience of getting to know Koko the gorilla. Since Koko can understand English spoken language, the pair hit it off easily. Watch above, as Koko grasps Williams’ hand to kiss it and even tries on his glasses. Koko’s caregiver Dr. Penny Patterson later explained that Koko had been so “withdrawn” since the death of her gorilla companion Michael, that to see her light up around Williams was a total shock. Koko had not smiled in six months!

Later on in the visit, Koko instructs Williams to partake in some of her favorite activities: chasing and tickling. And Williams seems genuinely enthralled to partake in the gorilla playtime. Before long, they’re both giggling. At one point, Koko taps a VHS copy of one of William’s films to say “That’s him.” (Koko had apparently watched the movie before.) Clearly, she understood the actor’s identity. And she also seemed to understand his comedic impulse: Koko imitates Williams’ facial expression which begins a funny back-and-forth. It’s no wonder that the ever-empathetic Williams said they “shared something extraordinary: laughter.”

In addition to naming simpler items — like food, drink, kittens — Koko’s rare sensibilities allowed her to understand more conceptual ideas: happiness, life, and of course, even death. Koko had already experience loss, with the passing of Michael and before that, when her famed kitten All Ball was hit by a car. So years later, when Williams took his own life in 2014, Koko knew what happened. And she was devastated.

After Robin Williams died tragically in August 2014, Penny Patterson shared that Koko had overheard her discussing the news on the phone. “She became extremely sad,? Patterson said, writing on the Koko.org blog that “Robin?s ability to just ?hang out? with Koko, a gorilla, and in minutes become one of her closest friends, was extraordinary and unforgettable.? A spokesperson for the Gorilla Foundation also said in a press release that Koko “was quiet and looked very thoughtful… Koko became very somber, with her head bowed and her lip quivering” upon hearing that Williams had died. She also signed the words for “woman” and “crying” in response to witnessing Patterson’s emotional phone call. For some time, Koko’s reaction to the news of Robin Williams’ death was trending.

Koko herself passed just four years later, on June 19, 2018. The Gorilla Foundation announced, per the Associated Press, that the the western lowland gorilla “died in her sleep at the foundation’s preserve in California’s Santa Cruz mountains.”

WATCH: Gorilla and New Mom Bond Over Their Babies at Boston Zoo