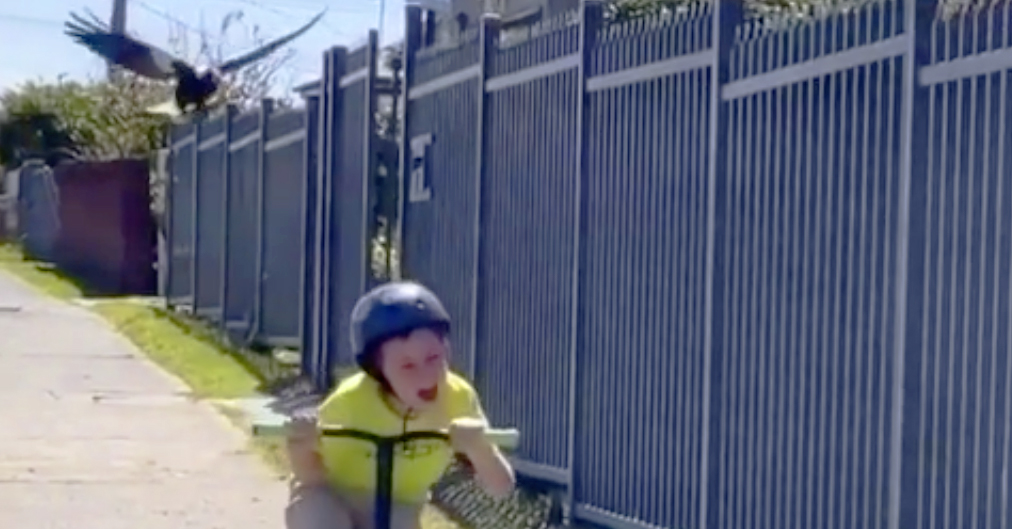 It’s swooping season. A young and terrified Australian boy was caught on video fleeing from Australia’s most dangerous predator. Not a croc. Not a snake with enough poison in its bite to kill a whale. Not a spider the size of a dog. No, something deadlier still. The vicious and relentless Australian Magpie.

This poor boy. Scooting away as fast as he can, shrieking and trying not to wreck his scooter, while this swooping magpie terrorizes him. He’s completely helpless. Totally at the mercy of the aggressive magpie. And, naturally, the only passerby who could help him is too busy filming his misfortune to help. Classic.

The origin story of a person’s fear of birds. from PublicFreakout

As it turns out, seeing these angry birds swoop down on the unsuspecting and the innocent is extremely common. No Aussie is safe from a magpie attack between September and November. Most of the country has to be on full magpie alert. That’s this Australian bird’s breeding season, so needless to say the male birds are pretty jacked up.

The stories of male magpie attacks are as common Down Under as they are brutal. As evidenced by the above video, the troublesome bird doesn’t care who you are. If you piss it off during mating season it will mess you up. The magpie is known to cause some pretty gnarly head injuries, either with a peck from its sharp, imposing beak or with cuts from its claws.

The magpie’s attack is so painful that people from Sydney to Brisbane and Melbourne will go to great lengths to avoid them. One Australian cyclist recently died while trying to evade the swooping bird. (The cyclist didn’t choose death over a magpie wound, for what it’s worth. They just died trying to get the hell away from the bird.)

Across New South Wales and Queensland in particular, it doesn’t matter whether you’re a sweet, rosy-cheeked boy or a fragile old man, the Australian Magpie will kill you in front of your entire family. Probably. All we know for sure is that the magpie came to Australia to eat bugs and kick ass, and apparently it’s pretty much always out of bugs.

Here’s hoping this little boy was able to scoot home safely, though it feels like there’s a decent chance there will end up being a report about him having gone missing on ABC. And all they’ll ever find is the scooter.

This whole continent needs to be armed with a tennis racquet for half the year.