In 1963, the Bronx Zoo Had an Exhibit Called “The Most Dangerous Animal in the World” 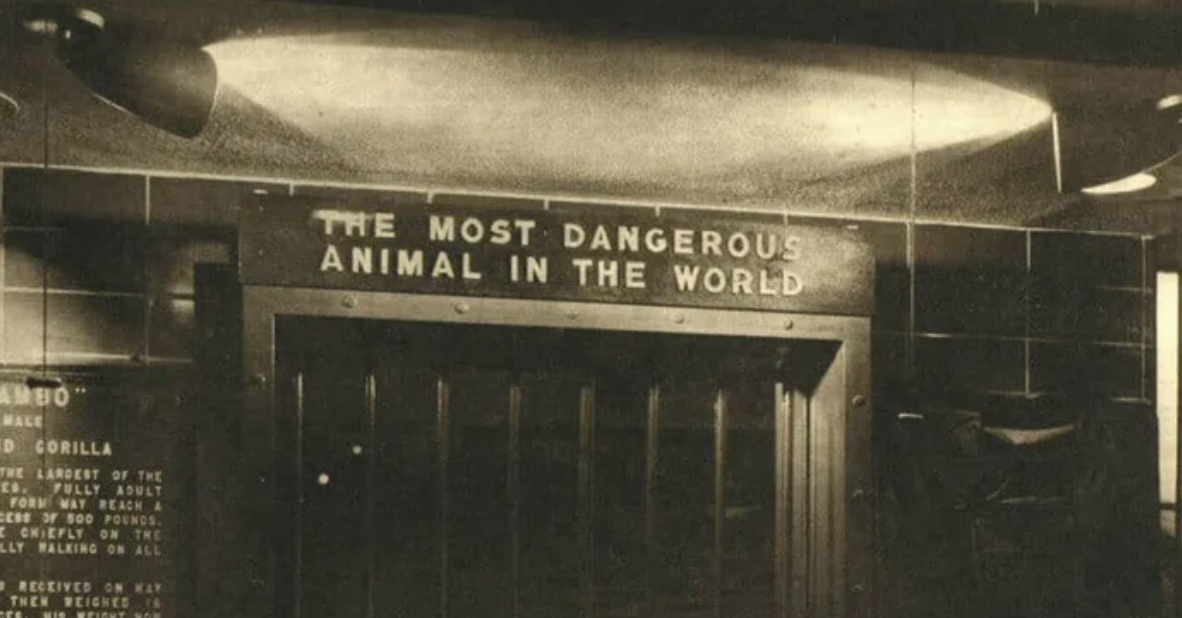 ?You are looking at the most dangerous animal in the world. It alone of all the animals that ever lived can exterminate (and has) entire species of animals. Now it has the power to wipe out all life on earth.? – Great Apes House, Bronx Zoo (NYC), 1963

The above is the description listed below a 1963 exhibit at The Bronx Zoo entitled “The Most Dangerous Animal In The World”. Spoiler Alert: the exhibit was only a mirror with the words “The Most Dangerous Animal In The World” in red on the top of the cage and the previous inscription below it. Later the text was rephrased to say: “This animal, increasing at a rate of 190,000 every 24 hours, is the only creature that has ever killed off entire species of other animals. Now it has achieved the power to wipe out all life on Earth.”

The New York City exhibit was placed between the Mountain Gorilla cages and “Orang-utan”. On their way between the two exhibits, New York Zoo goers saw the title and what appears to be another caged animal, what they saw, instead was a barred mirror with their own faces reflected back at them.

You are looking at the most dangerous animal in the world ☠️ It alone of all the animals that ever lived can exterminate (and has) entire species of animals. Now it has the power to wipe out all life on earth.”⠀ ⠀ This protest art installation was created in the New York Zoo in 1963, between the Orang-Utan and Mountain Gorilla cages, to reflect in a mirror the visitors who wanted to see the most dangerous animal in the world… In a zoo. What an irony, don't you think?⠀ ⠀ #mostdangerousanimalintheworld #mostdangerousanimal #artinstallation #NY

This exhibit speaks to the power humanity has. Visitors often said that what they saw in the exhibit was true. This danger includes control over other species, the planet, and ability in the struggle for the entity over each other. The goal of “The Most Dangerous Animal In The World” was to highlight the alarming rate that humanity is destroying the homes of animals. Alternative signage around the zoo warned, “In 20 years, almost all will be gone and their wildlife lost forever.”

The exhibit’s goal was to encourage the conservation of wildlife and lessen humanity’s consistent deforestation and destruction of the natural habitats of animals we admire. However, one of the zoos focuses was propagating rare species with the intent of releasing them back into the wild. But if there was no wild left, that wouldn’t be possible. Hence, the warning. Another message read, “In the end, we will conserve only what we love, we will love only what we understand, we will understand only what we are taught.”