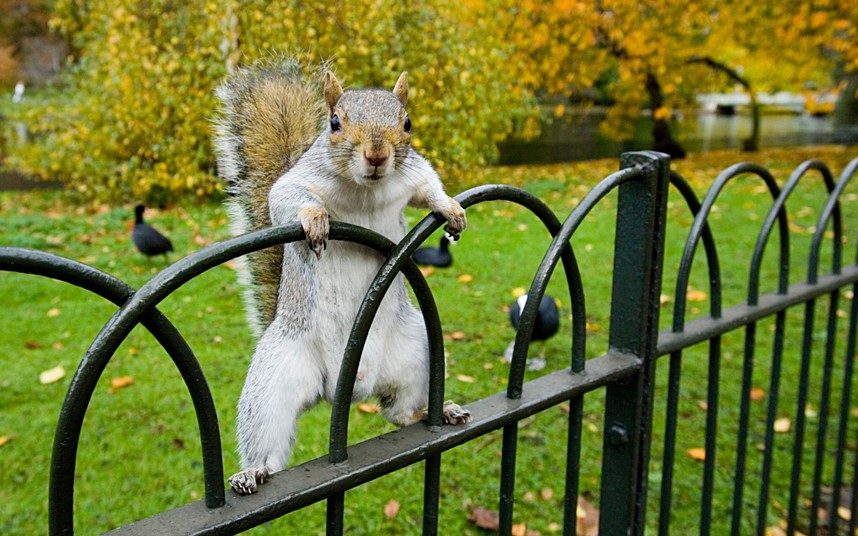 The squirrels in New York are feistier — and more dangerous — than ever. “This was an MMA cage match! And I lost!” said Micheline Frederick, who was viciously attacked by a squirrel in her Queens neighborhood last December. Frederick’s blood was left spattered on the snow following the shocking assault by a small rodent. (The disturbing pics quickly went viral on social media.) CBS 2’s WCBS-TV reported that several other Rego Park residents have described similar attacks since late November; the local squirrel population seems to be lashing out unprovoked.

The NYC Department of Health advised hiring licensed trappers, but they cannot account for the squirrels’ sudden aggressive patterns of behavior. According to the CDC, squirrels rarely carry for rabies. Regardless, some residents have been treated at the emergency room with precautionary rabies shots. Among them, Vinati Singh who recorded one of the threatening squirrels on her mailbox. Singh said it’s gone after her husband multiple times. One of Singh’s relatives told ABC 7: “When we leave the house, we have to carry mom’s homemade pepper spray to make sure if it comes at us, we spray it.”

This is not the first time that NYC locals have dealt with squirrel attacks. In 2019, Squirrels in New York’s Rockefeller Park in Battery Park City began begging people, quite forcefully, for food. Years of supplying these park inhabitants with bread and old hot dogs had turned the squirrels into regular little New Yorkers themselves: aggressive, hungry, and desperate. The parks department usually records around 30 squirrel-related attacks a year but in one week in Rockefeller Park alone, there were multiple attacks reported. Most of them happened on the playground because, of course, children are the easiest targets.

When whole packs of squirrels start to set out for some pizza, it seems like only a matter of time before turning to the soft, juicy flesh of kindergartners. One minute a parent will be returning a text, the next they’ll look up to find squirrels tearing their kid limb from limb. If this trend continues, it seems like the squirrel ambush could swell to Hitchcockian proportions. Who had the squirrels on their apocalypse Bingo?

Editor’s Note: This article was originally published on August 14, 2019.

Watch: 5 GREAT SQUIRREL RECIPES YOU WON’T BE ABLE TO RESIST