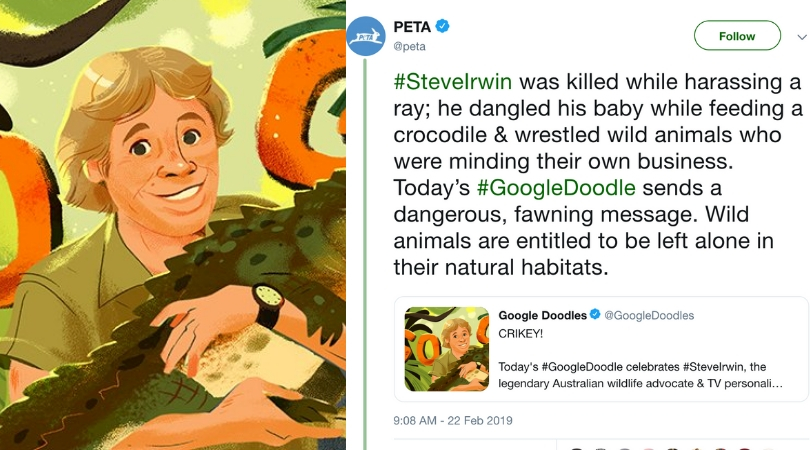 It looks like PETA is at it again, but this time, the public is not too happy with their choice of words. PETA sparked huge outrage online, after posting a number of tweets criticizing the Australian legend himself, Steve Irwin, on what would have been his 57th birthday.

On February 22, Google Doodles decided to honor the Australian animal lover, TV personality, and wildlife advocate for his “bravery and passion”. Google thanked Irwin for his courage and for his ability to open the eyes of millions worldwide to the wonders of wildlife. The father of two died in 2006 after being stung by a stingray, but his family has made it point to continue educating about the importance of wildlife worldwide.

#SteveIrwin was killed while harassing a ray; he dangled his baby while feeding a crocodile & wrestled wild animals who were minding their own business. Today’s #GoogleDoodle sends a dangerous, fawning message. Wild animals are entitled to be left alone in their natural habitats. https://t.co/9JfJiBhGLw

Of course, PETA being PETA, quickly took matters into their own hands, stating Irwin spent his entire career “harassing animals that should be left alone in their natural habitats.” The organization, who has more than one million followers, said Irwin was killed while harassing a ray, dangled his baby while feeding a crocodile and wrestled wild animals who were minding their own business.

PETA claimed that the Google Doodle (which I should remind you is just an innocent drawing of Irwin embracing a crocodile) send a dangerous and “fawning message” since wild animals are entitled to be left alone in their habitat.

Steve Irwin taught us to live along with animals, his message was nothing less than full wildlife conservation. He never did anything to stray from that. What have you done @peta ? Killed 70% of the sheltered dogs you've "rescued" you're fucking disgusting. #donate

“Steve Irwin?s actions were not on target with his supposed message of protecting wildlife. A real wildlife expert & someone who respects animals for the individuals they are leaves them to their own business in their natural homes.”It is harassment to drag exotic animals, including babies taken from their mothers, around from TV talk shows to conferences & force them to perform as Steve Irwin did. “Animals deserve to live as they want to, not as humans demand – the Google Doodle should represent that.”

As expected, people around the world were upset with their comments, branding the organization disrespectful and insensitive. Users were quick to defend Irwin, saying his life mission and work ethic was to save animals all while educating people about them. South African Actress Lesley-Ann Brandt, responds to PETA saying the “Crocodile Hunter” dedicated his life to saving Australian wildlife and continues to do so despite his death. Actor Drake Bell also spoke out, saying the organization was “disgusting” and should be ashamed for criticizing the father and husband since he has done more for wildlife conservation that PETA itself.

So your response here is this Human deserved what he got and is better off dead?! You are a disgusting organizationand and should be absolutely ashamed!! He was a FATHER and a HUSBAND and did WAY more for wild life conservation than the IDIOT INTERN hired to write this tweet!

Despite the heavy amount of criticism and backlash, the animal rights group did say it stand by its words. Now hold on to your horses because I’ve got my two cents in here. Honestly, I’m going with the Twitter users with this one. This is devastating and heartless, and not thought out through. I know PETA tries really hard to make it a point to show us that veganism is the way to go and is the only solution to saving animals, and they are no strangers to making headlines for doing something stupid or saying the wrong things. But this, this is far too much PETA.

Criticizing a man who dedicated his life to give back not only to other humans but to wildlife creatures that some of us are too afraid to even look at, is just cowardly. He managed to not only spark awareness, but curiosity and interest in wildlife by finding a way to appreciate them, despite what their reputation was. Maybe you should keep your tweets for yourself, or maybe research iconic legends before attacking them and opening your mouth.

Steve Irwin saved the lives of countless animals in his sanctuaries. He helped educate millions globally about animals’ needs and ways of life. He loved animals and cared for them greatly. You do some good work helping animals PETA, but how about some balance and more respect… https://t.co/olpLCvKepN

Steve Irwin has done way more for the environment by educating the world to the wonders it can provide. Stooping low to this will never give you the respect you want. Too far PETA.