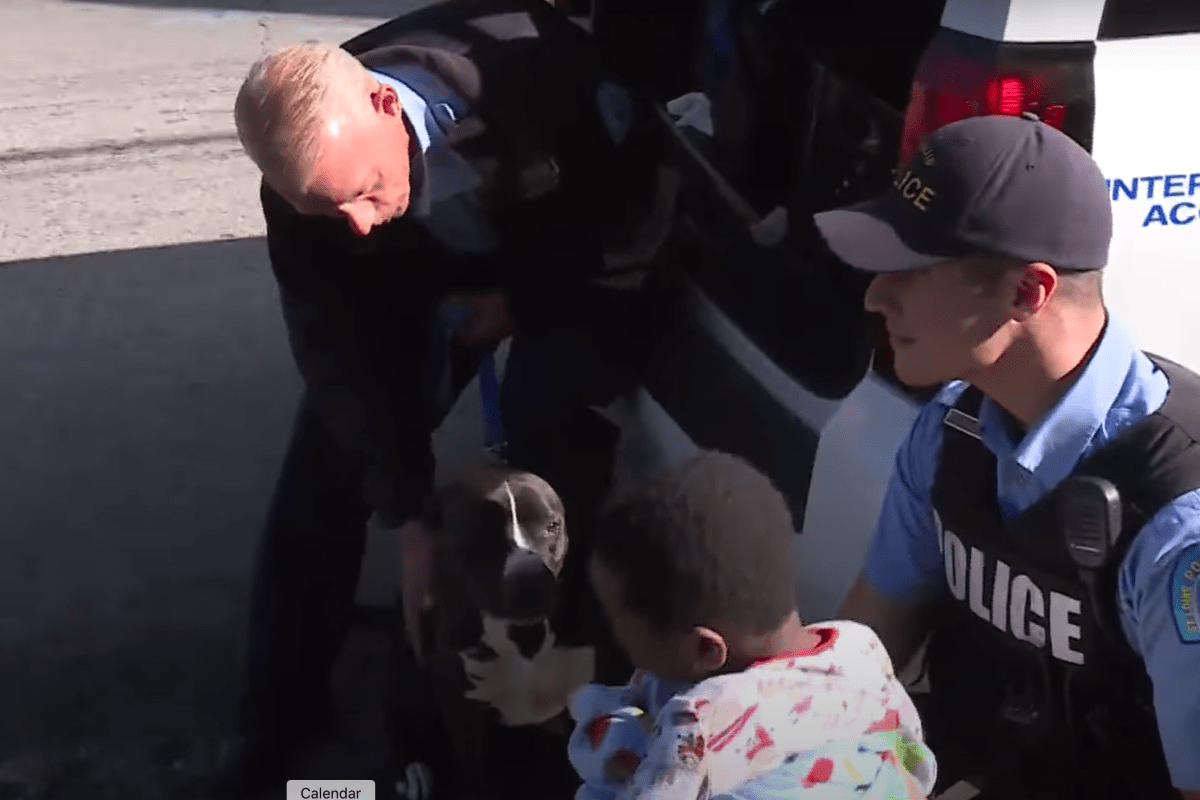 A toddler in St. Louis was lost and wandering the streets on a recent October morning but thankfully for the little boy and his family he had a guardian angel. Or, rather, a friendly guard dog. A stray pit bull kept the toddler safe until a local woman found the boy and reunited him with his family. (This is the sort of story that should be trending.)

Kh?amorion Taylor was walking up and down the streets of North St. Louis the morning of October 1st. He was in his pajamas and didn’t have shoes. There were no adults around. No one seemed to realize he was missing. (Whether he wandered out the back door or got out of his home some other way, no one knows.)

Things could have taken a much worse turn than they did, but they didn’t because strolling alongside the little boy was a hero dog who proved that canines really are man’s (and woman’s and young girls’ and boys’) best friend. Nothing was going to happen to this boy while the pittie, who immediately had a special bond with the toddler, was keeping watch.

Finally, a second hero showed up. A woman who preferred not to be named came across the little boy as she was walking her own two dogs. Realizing that he was clearly not where he was supposed to be the woman — along with the protective stray pit bull and her own two dogs — started going from one of her neighbor’s homes to the other trying to find out whose baby this was.

She went from one door to the next door but had no luck. Finally, though, thanks to a social media post about the boy being missing, Kh?amorion’s dad figured out that his kid was out in the neighborhood and he booked to go get his baby.

As far as anyone could tell the Kh?amorion simply just… wandered out of his house to get up to some toddler trouble, as little kids are wont to do. It’ll definitely be a story the family tells for the rest of his life.

Meanwhile, the stray pit bull who kept Kh?amorion safe was taken in by the St. Louis Police Department, who are considering adopting the protective pup.

And in case anyone was wondering, Kh?amorion was well aware that he had a furry friend looking out for him the whole time. After he was reunited with his dad Kh?amorion kept exclaiming, “Puppy!”

Kh?amorion’s story is reminiscent of a story from 2018 out of Stockton, California in which a family’s 8-month-old pit bull named Sasha saved the family’s 7-month-old daughter from a house fire by dragging her off the bed by the diaper.