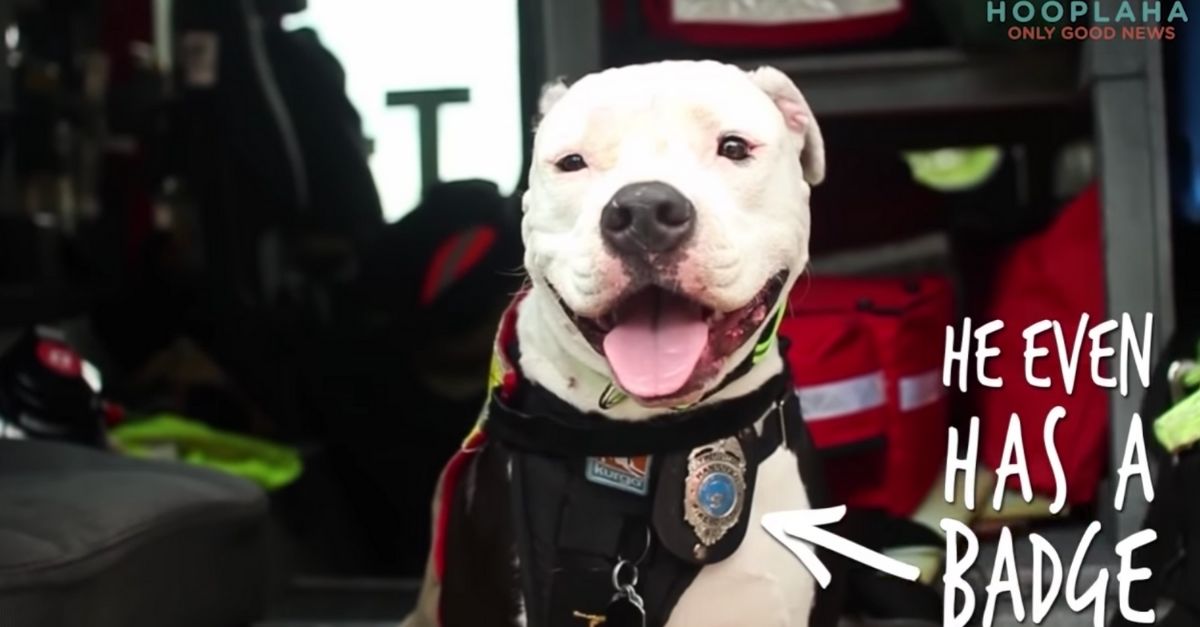 It’s great to hear stories of how people get into their careers, especially first responders. Many of them recall how an event or person saved their lives, inspiring them to pursue that respective careers. Well, if dogs could talk, I’m sure this adorable pit bull would say the same thing.

In March of 2016, Bill Lindler, a South Carolina firefighter with the Hanahan Fire Department, came home to find his neighbor’s garage on fire. Of course, he naturally immediately stepped into his firefighting role, doing what he can before the fire department came. But he found himself limited when he realized a pit bull puppy was still stuck.

“I saw Mama dog and several puppies running out. I saw one puppy trying to make his way out, when a piece of the ceiling fell on top of him. He started yelping, but he wiggled himself free and backed into a corner and cowered down,” he said to the Dodo.

When the fire department arrived, Lindler went in the burning building to find little Jake, holding on to his last breath of life. Lindler explained, “I brought him outside, and he was pretty bad. He wasn’t moving. He wasn’t breathing. I did mouth-to-snout on him, until we could administer oxygen.”

Although little Jake survived, he needed to go to an emergency vet clinic. Lindler went to go check on the pitbull puppy, only to find that he was going to be claimed as “abandoned” since the puppy’s family did not come through to claim him.

Nevertheless, Lindler decided to adopt Jake as his own! He explained the the vet was thought it was appropriate that he should want Jake and to not worry about the medical bills cost. Over the next several weeks, Lindler helped Jake fully recover, despite Jake being burned over 70 percent of his body.

Soon enough, as Jake started to regain his health, Lindler brought him around the fire station. Everyone loved him so much that Jake was sworn in as an honorary member of the fire department as well as their official mascot, being the first dog to hold that title.

The poor puppy’s body still has scars from the fire, but it’s not stopping him from being an active part of the fire department. Wearing his scars like a badge, Jake tags along with his now fellow firefighter colleagues as they go to local schools to give fire prevention presentations. He even has a future with more responsibilities, as the Hanahan Fire Department planned to make him an arson detection dog, where he will learn to distinguish scents when a fire is happening.

Thank you for your service, Jake!

Editor’s Note: This article was originally published on Jun 29, 2020.