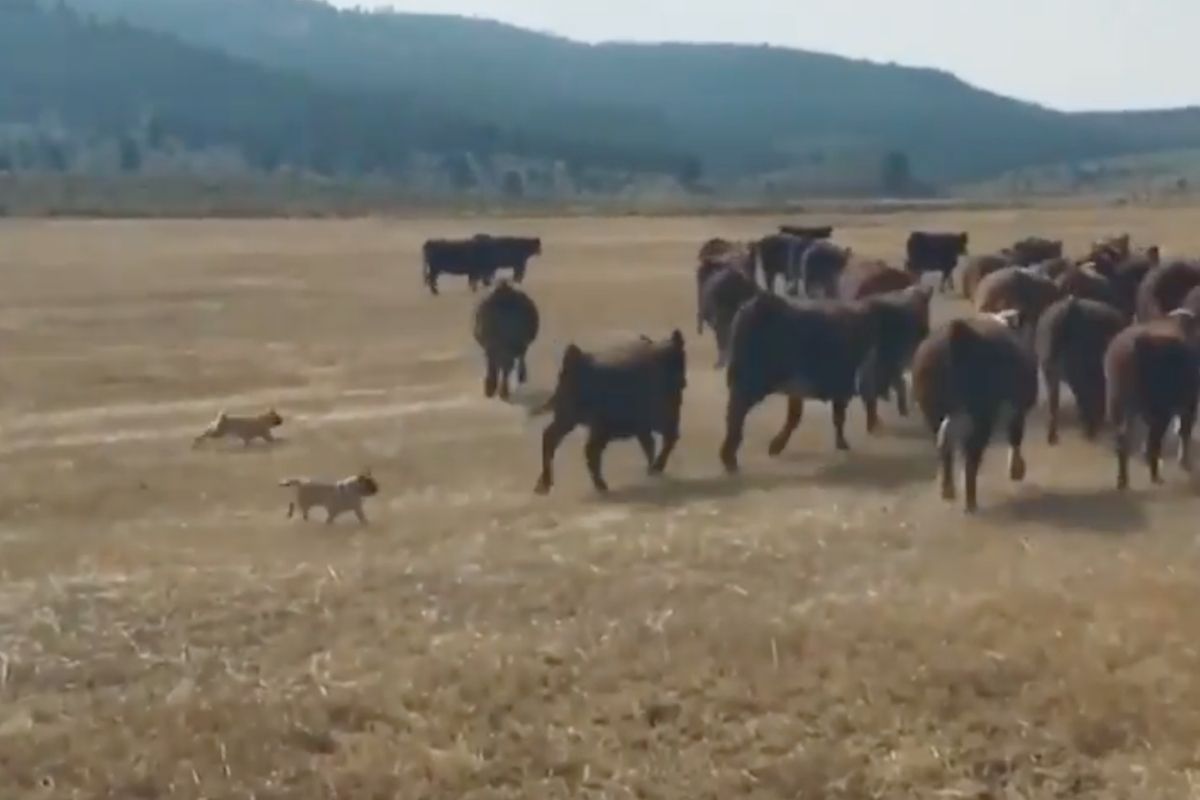 It’s not the size of the dog in the fight, it’s the size of the fight in the dog. A couple of farm pugs who happen to be expert cattle herders prove that in this video making its rounds on the internet.

Australian Cattle Dogs Move Over, Pug Mixes it Up with Livestock

As a dog breed pugs are better known for being cuddly, snoring house dogs more comfortable lounging than herding. They’re some of the cutest dogs around but like a Chihuahua, Boston Terrier, or French Bulldog these pooches are not exactly what you think about when you picture a herding dog.

That doesn’t mean spit to 3-year-old Paisley and 1-year-old Tuff, though. There’s no need for Australian Shepherds, Labrador Retrievers, or Blue Heelers at the Silvies Valley Ranch resort, in Seneca, Oregon because their pair of pugs do all the cattle wrangling.

The pugs actually love the job so much that they become depressed when they’re not invited out to do the chore. And no, these small dogs aren’t crossbreeds with German Shepherds or even Golden Retrievers. They’re 100% purebred pug.

At first, it didn’t occur to the dog owners at the ranch to have the pugs herd cattle but they felt bad that they were leaving their pugs inside all day while they were out working. So 26-year-old rancher Sara Jean Wedel brought her best friend Paisley along with her. She quickly noticed that Paisley was doing exactly what the Border Collies herding the cattle were doing.

Wedel started teaching Paisley basic cow dog commands and the next thing she knew she had a tiny cattle dog on her hands nipping at the heels of her herd.

What’s Next, a Pomeranian at a Firehouse Instead of a Dalmatian?

I’m actually all in dog breeds doing stuff you don’t expect out of them. A Great Dane playing with little kids, a poodle as a junkyard dog (they’re kind of mean), Corgis pulling a kid’s snow sled while Siberian Huskies accompany yoga pants-clad suburban moms to Starbucks.

This is also a great time to mention that we should be crossbreeding more types of dogs with pugs. Pug mixes are the best. Pug and Beagle, Pug and Aussie, a Pug-Red Heeler mix, a Pug mixed with a Greyhound so we can have the world’s fastest pig — whatever. More mutts, less of these unrealistic dog food ad pure breeds.

Editors Note: This article was originally published on October 15, 2020.