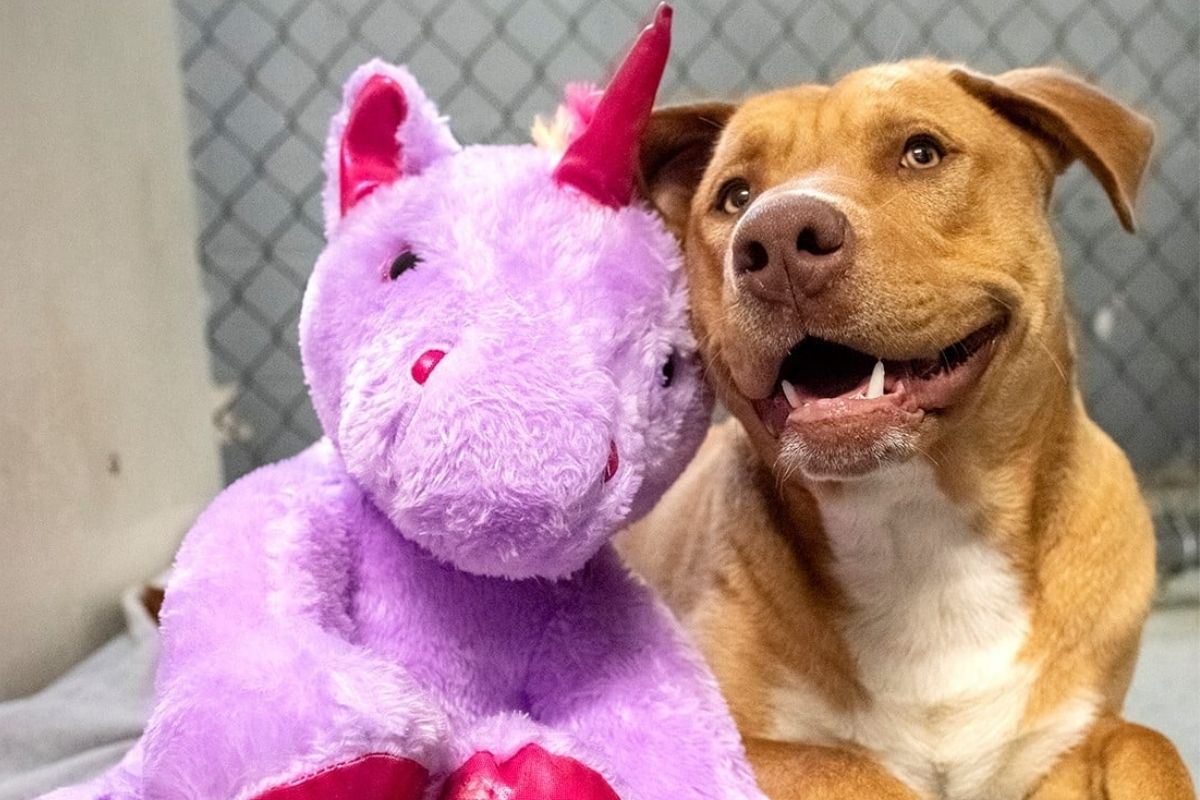 Sisu was a stray dog who made national news after repeatedly trying to steal a purple unicorn toy from a North Carolina Dollar General store. Now he’s on his way to an adoptive family.

Sisu and the Unicorn: Best Friends

Sisu is a large one-year-old lab mix, and all he wanted was a new toy. But as a stray, Sisu had to use his street smarts to get it. Hanging out near a Dollar General store in Kenansville, North Carolina, Sisu snuck inside every time the automatic doors slid open, making a beeline to the toy aisle for one plush purple unicorn.

Sisu tried to carry out this act of larceny five times according to CNN, the store employees called Animal Control to take the pooch away. Joe Newburn, a supervisor at Duplin County Animal Services, described the heist to People Magazine: “He actually had to go through the whole store to get to that unicorn. It was in the Easter section he went to that same unicorn and kept pulling it out, and finally, he had done it so much the store called us.”

When Animal Control Officer Samantha Lane arrived at the scene, she was so taken by the wily pup’s devotion to the unicorn that she purchased for $10. Sisu got to keep his new friend when he was sent off to a Duplin County Animal Services shelter. There, photos of Sisu and his unicorn were taken and shared in a trending Facebook post. (See above.)

“[The unicorn] goes wherever he goes. We’ve noticed as long as it stays by him, he’s good, but we do notice when the unicorn gets dirty, he won’t mess with it. We’ve had to wash it a bunch. If it’s dirty, he puts it off to the side and just stares at it, but once you wash it, he’ll lay on it.”

With such adorable photos circulating on the Animal Services Facebook page, of course, Sisu was quickly adopted. But he has not made it to his forever home yet. Currently, he’s at Lab Rescue LRCP to receive training for behavioral issues. Like many strays, Sisu has struggled to socialize with other dogs and will need to become more comfortable before moving in with his new family. One thing is for sure though: when he unites with them for the first time, the purple unicorn will be right by his side.

Not only that, but Sisu will have even more stuffed friends! Dollar General announced in a statement that they will provide Sisu’s eventual parents with extra purple unicorns — and are making a substantial pet food donation to the Duplin County shelter. It was a happy ending for everyone involved, especially considering the new attention and joy that Sisu has brought to the shelter.

WATCH: The Woman is Teaching Her Dog to Speak in the Most Creative Way