Woman Finds Spider Eating a Bat in Her Front Yard 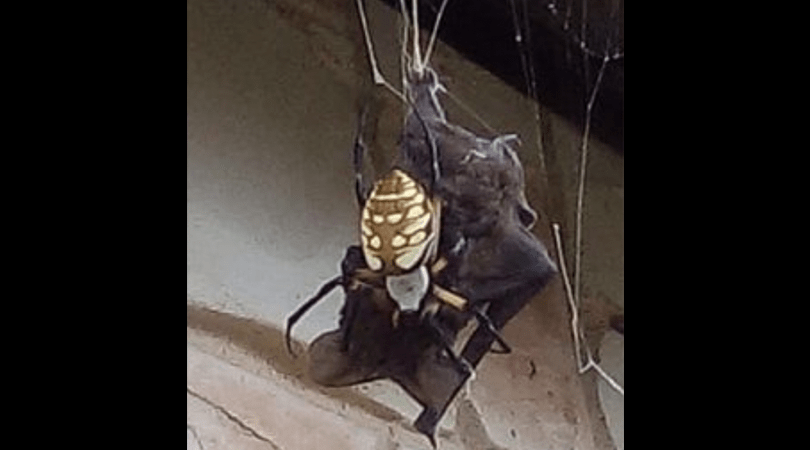 A Texas woman had to do a double-take the other day to make sure she was walking around in her yard and not the seventh circle of hell. That’s because she found a giant spider eating a bat that had gotten trapped in its web. This is nightmare cocaine.

Annette Alaniz Guajardo of Poteet, Texas took a video of the feasting demon while walking on her ranch property. By the time she got to the web the bat was already dead and having its warm mammal innards sucked out by the arachnid whose hide is as yellow as the flaming void it crawled out of. The video is… gross. This whole thing is gross. But we are sick people, so here it is for your viewing pleasure.

Take as much time as you need to puke and cry.

The spider in question is a Argiope aurantia, colloquially known as a banana spider and not a “Hell Crawler” as I had assumed. The banana spider is harmless to humans (a likely story) and is usually found in gardens. It mostly feeds on insects like flies and bees but has been known to eat larger animals like bats and birds. So, uh, if you see one of these in your yard and also happen to own a teacup Yorkie… you might want to do something about it. Just in case.

Banana spiders are found throughout the continental United States, Mexico, and Central America. Flamethrowers and dynamite have been found to be effective forms of banana spider extermination. If you encounter a banana spider but have no explosives or combustibles on hand scientists recommend taking a knife, edged rock, or whatever the sharpest object you have on you might be, slicing open the palm of your hand, and offering your soul to Lucifer, the Prince of Darkness, so that your weak body may be spared from the wrath of his minion.

Watch: THESE PHOTOS OF A REDBACK SPIDER EATING A SNAKE WILL MAKE YOU SHIVER