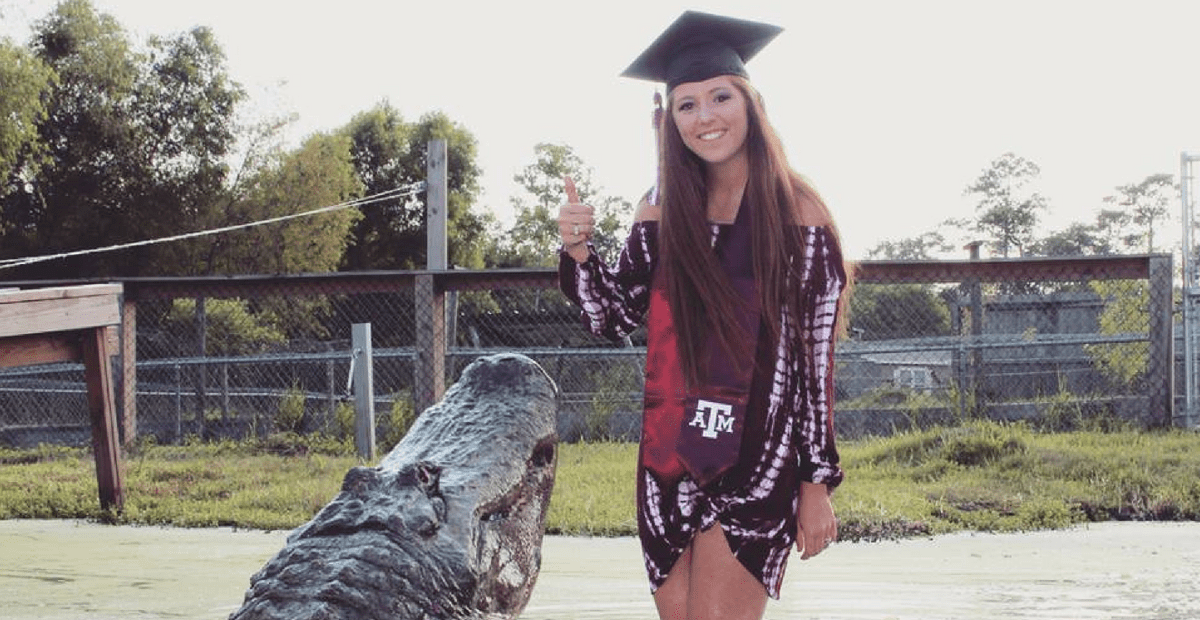 When Makenzie Noland published her graduation photos on Facebook, she never expected the post to go so, so viral. Originally from Bellevue, Nebraska, the Wildlife Ecology major with an emphasis on Wildlife and Fisheries Sciences from Texas A&M University has met the public eye with as much grace as she shows Big Tex in the now-famous photos. And that is an awful lot of grace for a 13-foot alligator that weighs over 1,000 pounds, y’all.

Before we get into it, I’d like to invite you to play this iconic song to really set the mood. Nothing gets you ready to talk about reptiles like Ray Wylie Hubbard singing, “Snake farm, it pretty much is,” and that’s a promise.

Buzzfeed News reached out to the Texas A&M student, along with various other news publications, to get the scoop on her dalliance with Big Tex, the lovable gator in Beaumont, Texas at Gator Country. You see, Gator Country is a rescue center that mostly gets its members, like Big Al and Big Tex, from folks’ backyards, swimming pools, and even parking lots. The website notes that Big Tex was rescued in October 2016 and is the record-holder for the largest live-captured nuisance alligator at 13 feet and 8.5 inches long.

So the nearly 14-foot long alligator is huge, that we know, but what’s most fascinating is Noland’s clear connection to Tex. Despite the social media hate she’s received, mostly for saying she’s nuts to get that close to the beast, Noland respects the heck out of Big Tex. She always follows the park’s safety guidelines and would never put herself in danger. She told Fox News,

“Every single time I get in the water with him I realize how huge of a creature he is. He’s a real life dinosaur.”

The park is a great place to volunteer if you’re interested in animal care and tour guiding, which is exactly how Noland found herself in East Texas with a new best friend this summer as she finishes her internship. Fox News reported that Noland has bonded with quite a few of the 370 alligators on site, but that her bond with Big Tex runs especially deep. She told the news outlet,

“Tex is the one who let me into his pond. He does pick favorites, and I’m honored he likes me enough to let me get in there and play with him every day.”

@ClayTravis Me calling Tex from his den to do a show at Gator Country! pic.twitter.com/BtvOOFCtXK

Noland shared with Buzzfeed News that Arlie Hammonds, the owner of the sanctuary, took the graduation photos after he suggested she place her Aggie ring on the alligator’s nose. She grabbed her graduation cap and Texas A&M sash to complete the look because hey, if you’re going to go for it in a photo shoot, you might as well go all the way.

If you visit Gator Country, it’s likely that Noland will be the one in Tex’s pond, hosting his feeding show for visitors to the park. We wish the college student well in her future studies and travels. She’s certainly given new meaning to the term, “See ya later, alligator!”

Editor’s note: This article was originally published on August 7, 2018.