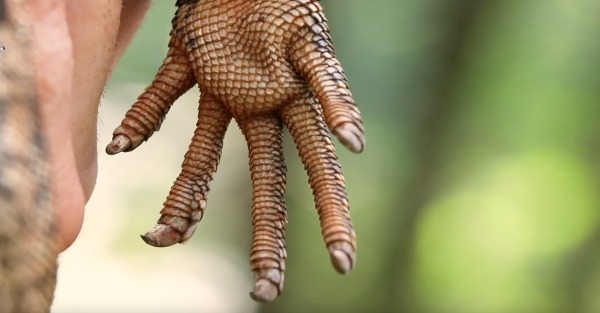 This spiny-tailed iguana looks like a dinosaur from “Land of the Lost.”

While at Kids Saving the Rainforest in Costa Rica, animal expert Coyote Peterson hunts down this wild lizard.

RELATED: We’re not sure what’s more weird: a lizard hunting stalking its prey or the awkward voiceover

The lizard is so strong and so fast, the host of YouTube’s The Brave Wilderness Channel has to make a snare several feet long to prevent it from biting him. Even with the snare, it appears to be quite difficult.

When he finally catches the enormous creature, he struggles to hold it as its mouth searches for something to latch onto.

RELATED: Preparing to attack, this massive lizard is whipping its tail back and forth

According to Peterson, when this “unbelievably prehistoric” creature existed 65 million years ago, it was four to five times its current size.

Now that would be a fun hunt to watch!