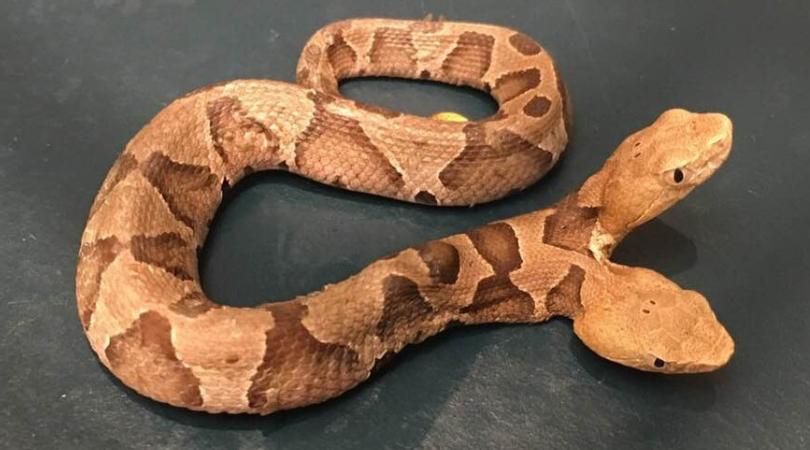 As if snakes weren’t terrifying enough, a woman in Woodbridge, Virginia, had the scare of a lifetime after finding a venomous snake in her backyard, with not one, but two heads! Like any sane person would do, she immediately called the Virginia Wildlife Management and Control, where a state herpetologist identified the snake as a two-headed Eastern Copperhead snakelet.

According to Rick Perry, who runs the wildlife removal company, Virginia Wildlife Management and Control, the woman found the snake in her front yard near a bush. Having no idea what it was, and afraid it would hurt her pets and kids, she scooped the snake up in a plastic bin. In the 40 years of wildlife removal business, this is the first time he encounters a double-headed snake as they are “exceptionally rare”. The double-headed snake is said to not live very long but can be extremely dangerous due to its venom.

After conducting radiographic exams to learn more about its anatomy, the Wildlife Centre noticed the heads each had their own esophagus and trachea, but share one heart and one set of lungs. The Centre decided to show the images of the rare snake on Facebook to alert people of the snake but has now gone viral because people thought it was a fake prank. I mean, can you blame them?

Experts stated the left head had the more dominant esophagus, and the right head had a more developed throat for eating. The left side was generally “more active and responsive” to stimulus, meaning it was the dominant side. Like anyone attached at the hip, the snake is known to fight with itself over which head swallows the prey, leaving them vulnerable to predators.

In a way, two-headed snakes are like human conjoined twins that occur when an embryo starts to divide into identical twins, but stops. Just like humans, the snakes can be separated at various points, meaning the head can act independently and live off each other if need be. As of now, the snake is currently in the care of a private reptile and was said to be taken to a zoological facility for exhibit.