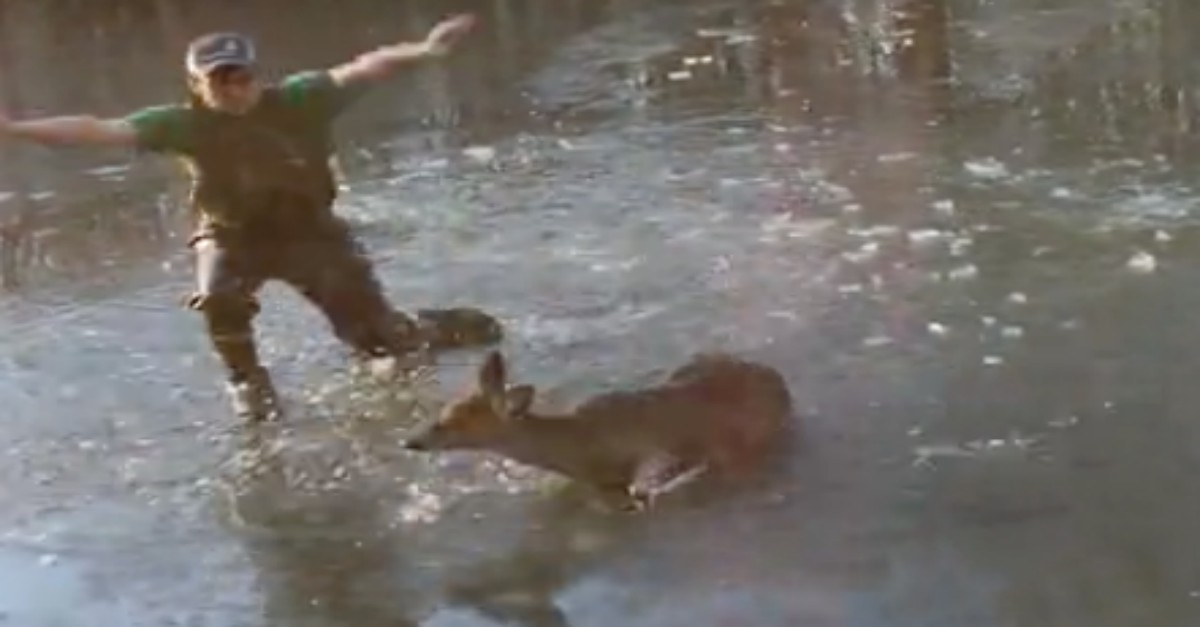 It’s the spirit of Arkansas I guess to be watching out for nature. The few times that I’ve visited the beautiful state have been vacations that have been more quiet with an appreciation for nature around. Small deer are basically playing hide and go see as you drive around the forests of trees and brush that make up the more rural areas. If I was part of a local family in Arkansas, then I would treat my surroundings as my loved ones too.

A deer was stuck in an icy frozen pond and desperately needed help. It was a good thing Garrett Cram was around. At the behest of his grandmother, Donna Fletcher and her son Charlie Cram, also Garrett’s dad, the 19-year-old son was summoned to the frozen Arkansas pond at his grandmother’s house, where he bravely rescued the animal.

At first, you see the baby deer thrashing, looking frightened and very unsure and weary of what Garrett is up to. Then, with his sledgehammer in hand, Cram nears the deer, cracking the ice and falling partially through it on his way. Fortunately, he’s equipped with waterproof boots and overalls, and the water doesn’t even reach his waist. I can’t even imagine what going into water at frigid temperatures is like.

Finally, with the help of his younger brother Parker, he was able to grasp the deer and half-slides, half-carries the animal back to shore. The grateful creature even lets Garrett nuzzle it for a moment.

The Arkansas family members were able to get the animal to dry off in a family effort and eat some straw and corn. And by the next morning, the deer had disappeared back into the woods. As well as these Arkansans rescue deer, it’s clear that this probably isn’t their first rodeo in helping out nature.

Editor’s note: This article was originally published on January 17, 2018.