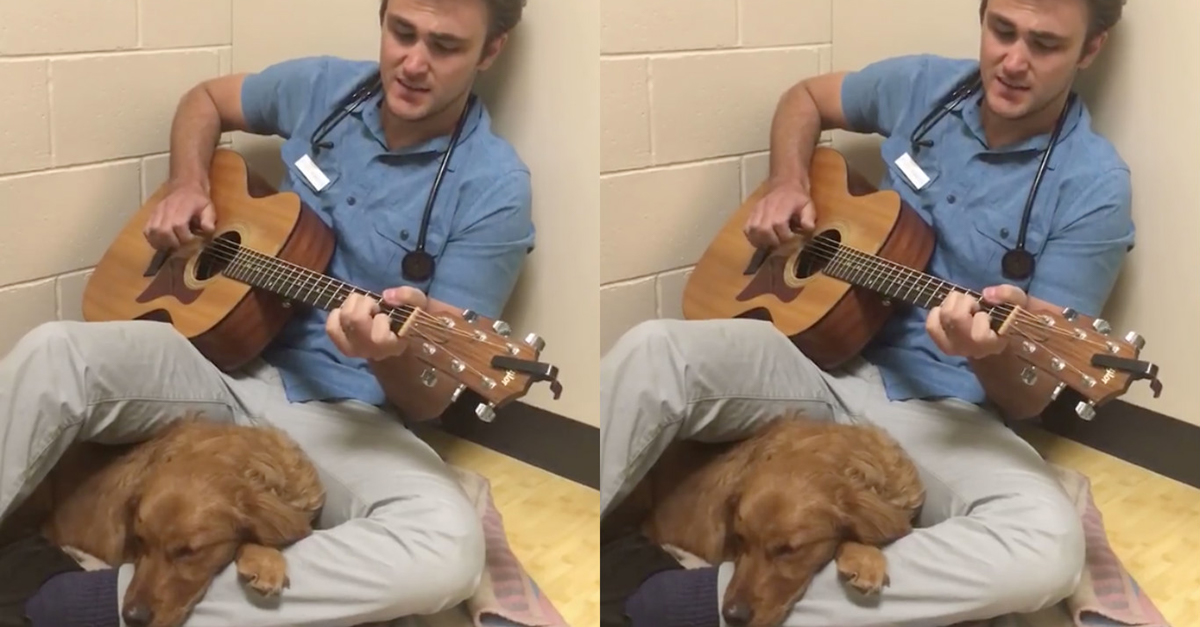 There’s nothing like pre-surgery jitters. So when a dog named Ruby started to lose her cool before her spay surgery, her veterinarian, Dr. Ross Henderson, traded a scalpel for a guitar.In this adorable video, the vet sings Elvis Presley song “Can’t Help Falling in Love,” in a serenade that seems to immediately soothe the scared dog. Sweet Ruby looked calmer than ever at the sound of his voice.

“It was a special moment,” he told the Today show.

The at the time 28-year-old veterinarian works at the Fox Hollow Animal Hospital in Lakewood, Colorado, where he practices with his father, Anthony Henderson, and brother Ryan, both of whom are also vets. He explained that although he always wanted to be a vet, he also loved singing and playing the guitar.

Now that Dr. Henderson can combine his passions, he and other staff members have regularly performed for the office cat, Greg. Henderson also mentioned that he thinks that Greg and his own dog, Charlie, are “immune to it,” because they might be sick of him constantly singing.

He believes the individual attention that he gives to his animal patients help them feel more comfortable and safe, since a hospital can be scary and too unfamiliar sometimes. He also believes music helps as well. He said, “They just love us like crazy. You can’t repay for how much they give to us.

Well isn’t that just the sweetest thing you’ve ever seen? I bet this dude is a total favorite with the ladies. Not only is he smart and talented, but he also obviously has a heart of gold, going the extra mile for these precious animals. The guy even made an adorable music video. We will definitely be following Dr. Henderson for more of these videos!

Editor’s note: This article was originally published on May 4, 2017.

Watch: Swim With Adorable Tiny Otters at This Animal Preserve