Woman Brings a ‘Coyote’ into the House and Husband Is Furious 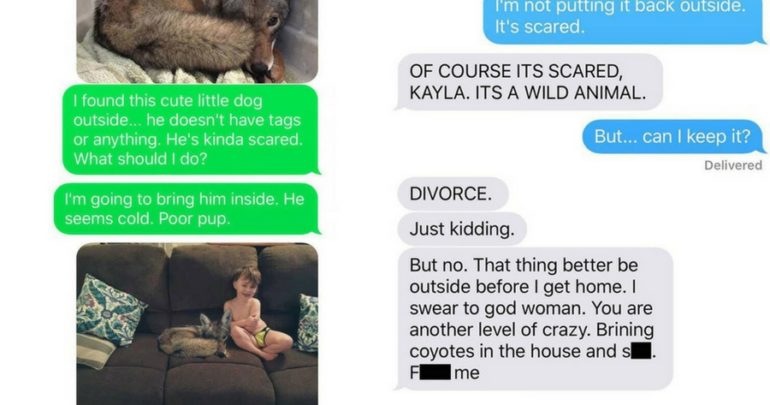 “Look how cute!” When a woman texts her husband that she found a lost dog that is clearly a coyote, she really tests the limits of her marriage. What happens next is a pretty ingenious prank.

It all started when a woman named Kayla Eby texted her husband that she found a sad, lost dog. So she told him she brought him inside, coincided with a photo of the cute little “dog” on the couch she made with some pretty impressive Photoshop skills…

Her husband responds and he is not happy. But even with her husband furiously texting back, Kayla sticks with her story. How long can she keep this up? She really starts testing his gullibility… But then she realizes that she might have gone too far…since she has brought animals home before. Why not a wild coyote? But she still keeps going… And basically makes him come home right away. Because she tells him there is now a whole pack of “lost dogs” outside. (The Internet is quite a resource, huh?) And she finally breaks and tells him the epic prank. But…something tell us he doesn’t quite believe her. But there is a teachable moment here, besides the fact that it is super fun to prank the people you love. The thing is, if she ever does find herself in a situation where there is a coyote in the house, and they’re in some serious trouble, she can bet her husband won’t believe her.

And that, ladies and gentlemen, is literally where the anecdote of “cry wolf” comes from…