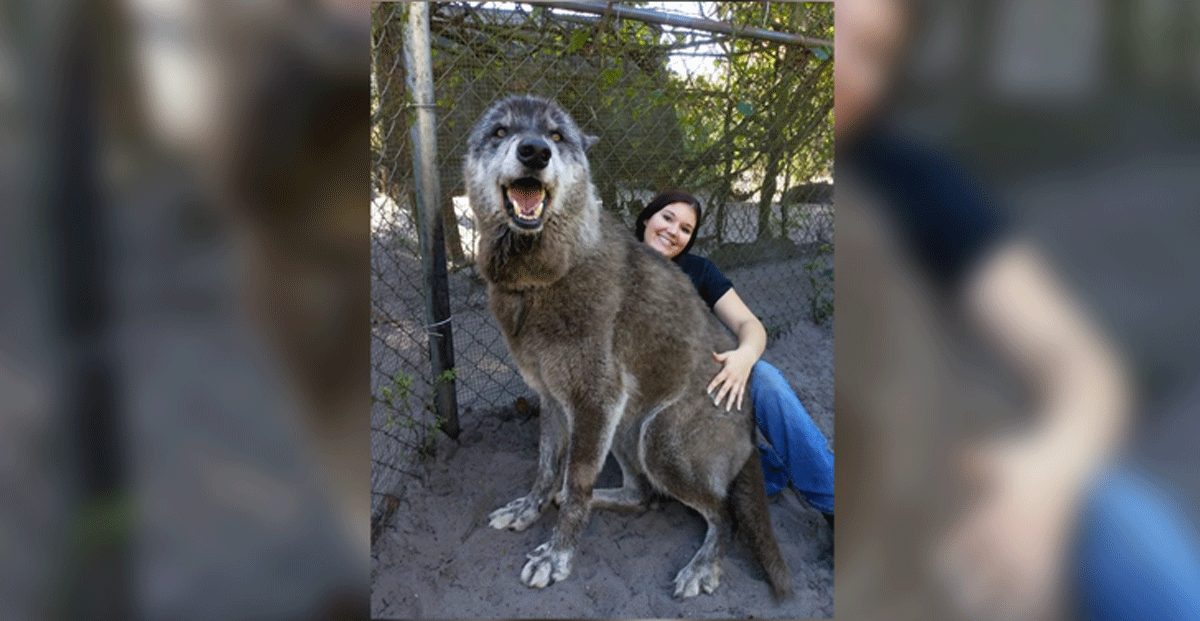 The year is 2008. Wall-E is in theaters. An eight-month-old puppy was just brought to a kill shelter in Florida. His owner, citing health and personal reasons, can’t handle the rambunctious puppy. This is where Yuki’s story begins. If Yuki sounds or looks familiar, it’s because you’ve probably seen the iconic photo of the giant wolfdog and one of his beloved “Harem” members, Brittany, around the internet. The pair’s gone viral in the past week or so for Yuki’s size alone. So how did Yuki end up at Shy Wolf Sanctuary?

I reached out to Jeremy Albrecht, the Director at Shy Wolf Sanctuary based in Naples, Florida to learn more about this viral photo. Jeremy’s been busy these days around the internet, offering up his expertise to readers on Reddit and more. When asked about that phone call that brought Yuki to the Sanctuary, Jeremy wrote,

“Not specifically, but it’s the usual, ‘Hey Shy Wolf, we think we have a wolf-dog here. We can’t adopt him out because of that, but if you guys want to come evaluate, we will give you the opportunity to rescue before we euthanize.'”

Yuki: “Sorry everyone, but I am not available for adoption. I am 12 years old and terminally ill so I will be staying at Shy Wolf with my pack friend Bella in our enclosure. However, you can sponsor me!” . . . https://interland3.donorperfect.net/weblink/WebLink.aspx?name=E192141&id=29 #SponsorYuki

And thank goodness they did! Phenotyping, the act of looking at an animal to determine their mixed breeds, was previously how the Sanctuary could sustainably test their rescues to confirm their DNA. So what exactly is a wolf-dog, you may ask. A wolf-dog (also seen as wolf-dog and wolf dog) is a canine bred through the mating of a domestic dog (Canis lupus familiaris) and a wild wolf.

As Jeremy told me via email, with Yuki, it was clear.

“Yuki is one of the most obvious wolf-dogs I’ve seen so it was an easy call. Our decision to DNA test him was unrelated. We would not normally spend our hard-earned donations on something like a DNA test because we evaluate the individual based on behavior, not wolf percentage. That said, in 2018, we received a grant to DNA test all of our animals, which is why we know all their true contents now.”

Jeremy wasn’t wrong in the 2008 assumption because Yuki is nearly pure wolf. As it turns out, Yuki is a crossbreed: 87.5% Gray Wolf, 8.6% Siberian Husky, and 3.9% German Shepherd. It’s his wolf content that makes him different from other wolf-dogs Jeremy’s encountered. When asked how Yuki is different from other wolf hybrids they have at Shy Wolf, Jeremy told us about Yuki’s special “harem.”

“He is different in the sense that even though he is, for all intents and purposes a full-blooded wolf, he forms such close bonds with some people that he becomes defensive of them. That is not something we see in our animals as in most cases if someone kicked in your front door, your wolf-dog will be the first to run out the back door. Maybe it’s that little bit of German Shepherd in him. He’s the same in that he requires that relationship to be earned and he’s not cool with a lot more people than he’s cool with…

“He has a small number of female volunteers that we affectionately refer to as his “Harem.” Brittany, the girl in the viral photo, is a member. As I eluded to above, the relationship is one of complete affection to the point of being protective. I guess that makes sense because his harem is very protective of him.”

So what if his owner had kept him, after all? I was curious about wolf-dogs as pets, something we’ve explored in the past on Wide Open Pets. After all, one has certain notions about wild animals, let alone high-content wolf-dog hybrids. I asked Jeremy about some common misconceptions about wolf-dogs and wolf-dog owners.

“Number one without question is that they make good pets. I try to never speak about animals using absolutes… but wolf-dogs are extremely difficult animals to manage and while it has been done successfully in a home, 99.99% of people are not capable of being successful.”

The takeaway? Leave the wolf-dog care to the hybrid owners and professionals at wolf-dog sanctuaries and other rescue organizations across the United States, no matter how cute that wolf dog puppy is or how great of a guard dog you think they’ll make.

If you want to help Shy Wolf Sanctuary in the future, there are a few ways you can! The sanctuary is looking for about 40 acres of land to purchase and develop so they can expand their sanctuary. The organization launched a GoFundMe so readers and fans of the sanctuary can support this exciting mission. Jeremy put it best when he said, “There are a lot of other Yukis out there to be saved but we need this new facility to do it. ”